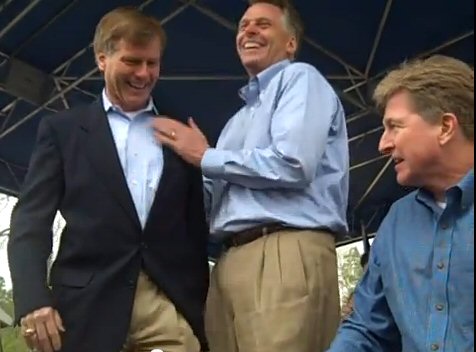 Never before has a sitting Governor and AG been so reduced in stature.

As this column has been saying for weeks now, Governor McDonnell needed to do something proactive on the gift/Star Scientific issue. So did Ken Cuccinelli. The self-evident play, as discussed, was calling a special session of the General Assembly to take a proactive stance.

But McDonnell remains frozen like the proverbial deer in the headlights. He just finished a telephone call with reporters saying that he has a lot to say about the latest wrinkle – the food fight with the ex-Mansion chef – but he can’t on the advice of lawyers since it is an active case. THAT AIN’T GONNA CUT IT as an excuse for being late from your job at Subway or a Burger King, let alone Governor.

As for Cuccinelli, he wants to recuse himself on another case. This isn’t helping him either.

Into the vacuum steps Terry McAuliffe, who has proposed to be the toughest anti-gift guy in the Mansion ever. It doesn’t matter what the details are at this point. Terry is acting like a Governor, taking the lead, taking a stand, doing SOMETHING.

As I have been saying for months: Terry’s team is in the game, Cuccinelli’s team isn’t capable of playing in that league right now. Forget the polls: they don’t matter right now. Terry has a campaign for Governor, Cuccinelli does not.

The AG has a lot of stances on a lot of things and lot of legal this and that. But he has no theme, nothing but “this is what I will do on this or that issue and by the way, my opponent is a big LIBERAL.” That’s good for 43% probably, the Ollie North number from 1994 give or take.

Terry has a message of where he wants to take the state: Cuccinelli has a message, at most, as to where he doesn’t want to take the state. The guy with the message wins. If you get into a car with someone, you want to know where you are going, not where you aren’t going. To this point, it seems to me Cuccinelli has recused himself from the campaign, not just a few cases.

As for the Governor, he is the lamest lame duck Governor ever in VA history. He can’t even comment on his own food guy because his lawyers fear the revelation. If this goes on for another 90 days, the Dems are going to win in a sweep.

“Glenn Youngkin and his administration are already showing the absolute moral bankruptcy of the Republican Party on DAY ONE! Stop ‘giving them a chance!'”