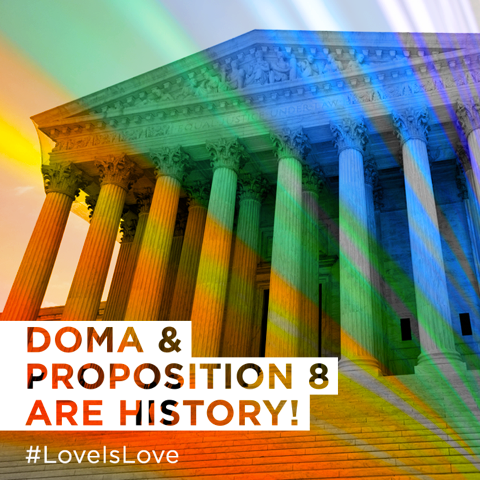 I disagree with the overwhelming majority who read the DOMA decision as leaving gay marriage as a state law – not a federal law- issue. In terms of legal think, I believe the key to the DOMA decision is anchored by this legal concept: a federal law on marriage CAN NOT deny to a couple marriage rights otherwise granted to them by operation of the state law recognizing their marriage.

The problem the 5-4 majority had with DOMA is therefore NOT it being a federal law per se, but rather, that DOMA operated to take away the rights that would otherwise flow to all married couples in New York State (the state residence at issue in that case, where same sex marriages are legal). Had DOMA INCREASED the rights given to married couples in New York State, then the logic of the decision would have found a 5-4 decision IN FAVOR of DOMA.

In legal think, this is the key: lawyers put cases in categories. The DOMA case here involved a federal law that operated to discriminate against some couples in New York, but not others, in terms of denying them rights the state had universally granted to those similarly situated (e.g., legally married under state law).

That is to say: The key to the 5-4 decision rests with the fact that in an area traditionally left to state law – marriage – the federal statute at issue UNDERCUT the state’s decision to protect all of its citizens in an equal and non-discriminatory manner. The federales, said the Supremes, cannot do that; this is an area left to state law. If North Carolina or Virginia want to ban same sex marriages, then the Court said: that’s their right, they can set the pre-conditions for getting married in their state.

WHICH MEANS FOR VIRGINIA: The 5-4 majority indicates it would UPHOLD a FEDERAL law that required Virginia to recognize same-sex marriages legally performed in any of the 13 states where they are currently legal. Why? Because that federal law would INCREASE the rights of citizens, not diminish them, in Virginia.

Why? Because right now, Virginia does recognize the marriages between couples of the opposite sex, legally performed in other states. However, Virginia doesn’t recognize legally performed out-of-state, same-sex marriages. Meaning if Sue and Sally get married in New York State, and move to Richmond, their marriage is not recognized under Virginia law. But if Sue and Sam get married in New York State on the same day, by the same legal authorities, and now live in Virginia, their marriage is recognized.

SO: Assume a Democratic Congress and a Democratic President pass DOMA 2. Only this time, it is based solely on requiring a state to recognize ALL legally valid, same-sex marriages from another state.

This case then gets to the Supreme Court. But this time, the DOMA 2 case is not about a federal law TAKING AWAY rights granted by state law…but rather a situation where the federal law ADDS RIGHTS denied by state law.

This time, the state has to defend why its laws recognize out-of-state marriages for some, but not for others, when all such marriages were legally performed and when the state law at the time intended to provide such couples with all the rights and privileges of any legally married couple. .

BOTTOM LINE: Far different case, but the same 5-4 logic gets you the opposite result. As DOMA 1 said, the states have been long held to have the constitutional right to define the marriage protections it is going to provide to its citizens in terms of who can or cannot get married. The federal government can’t pass a law changing that. But in the context of RECOGNIZING AN OUT OF STATE MARRIAGE, the issue is different: the legal question is whether Virginia could recognize some marriages, but not others, based on the sex of the partners.

At least this is my read of the tortured legal logic. I have to say Justice Scalia has a point here. But on the other hand, this is how lawyers do their thinking: you try to put each case in a box, so all before it and afterward fit neatly on the shelf. So if you can figure out which box applies to your new case, then you can play the game.

My 200-proof read: Yesterday’s DOMA decision DID NOT throw the same-sex marriage issue back to the states and cut Congress out of the picture. Quite the opposite: it provided Congress with a road map on what it could do, namely increase, not decrease, marriage rights. This makes perfect legal sense to me on the box theory.

Here in Virginia, I think the decision likewise pointed to the Achilles Heel in the state’s current ban: it operates to discriminate against legally performed marriages in other states, when those couples move here. As long as Virginia recognizes some, but not other, marriages, the logic of the DOMA decision says the Constitution prevents Virginia from so discriminating.

Again: This is why the DOMA case said states had the right to define marriage. Because the definition is law PRIOR TO THE COUPLES GETTING HITCHED. Thus, as long as the state law was applied equally to all those similarly situated – wanting to get legally married – then the Congress couldn’t after the fact take away these rights from some but not others.

HOWEVER: Virginia’s ban on recognition of some legal out-of-state marriages, but not others, occurs AFTER the marriage has taken place. Thus, the state, like the Congress in DOMA, is going to need one heck of legal argument to support such discrimination against those already legally married.

So unless Virginia is going to pass a new law which refuses to recognize the legality of any out-of-state marriage, I don’t see how the logic of the DOMA decision permits the current discrimination. That’s my take. In that regard, I think a Governor and an Attorney General could arrange for a test case with relative ease. Whether they should or not is a political issue.