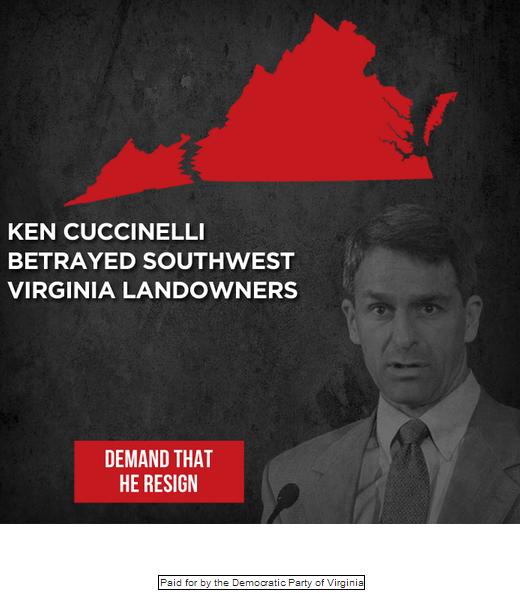 This week the Democratic Party of Virginia will begin running web ads in Southwest Virginia holding Ken Cuccinelli accountable for his office’s active assistance of two energy companies in a legal dispute with area landowners over unpaid mining royalties.

“Ken Cuccinelli and his office’s direct assistance to two gas companies in their fight against Southwest Virginia landowners is so inappropriate that even a federal judge was ‘shocked,'”said DPVA Executive Director Lauren Harmon. “Virginia needs leaders who fight for taxpayers, not against them.

“That’s why the Democratic Party of Virginia is acting today to hold Ken Cuccinelli accountable and make sure Southwest Virginia families know which side he chose when it was time to stand with Virginians or with out-of-state campaign donors.”

The new ads will be featured on the websites of popular Southwest Virginia publications as well as on Facebook and Twitter.

For more on this latest example of Ken Cuccinelli’s ongoing pattern of corruption, see here. As Sen. Phil Puckett says, “With this much at stake, it was positively outrageous to learn last week that Ken Cuccinelli’s office has been acting not as a neutral observer in this case, but as an active adviser to the companies who are seeking to avoid paying Virginians millions in royalties.” Outrageous, yes. Surprising, no.