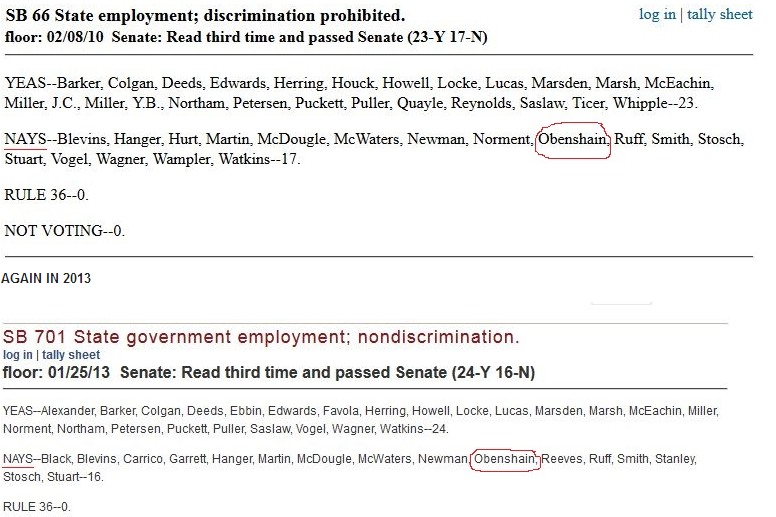 It’s truly infuriating when the media simply acts as a stenographer for whatever politicians and candidates have to say. Isn’t one of the main “value added” aspects to having journalists their willingness to dig a little bit, to uncover and report on discrepancies, to ask tough follow-up questions, and to let their readers know when a politician is snowing them?  Sadly, as Josh Israel of ThinkProgress reports, that was NOT the case with a recent Richmond Times-Dispatch story on several statewide candidates’ positions regarding LGBT anti-discrimination policies.

In a statement, Obenshain told the Richmond Times-Dispatch that he supports Gov. Bob McDonnell’s directive against discrimination on the basis of sexual orientation in his administration…

…But Obenshain’s record does not match that claim.  Though a bipartisan super-majority of state Senators and Delegates in 2005 signed statements averring that they would not personally discriminate in employment decisions on the basis of sexual orientation, he declined to do so. Eight years later, he has still never taken this simple step.

In 2010, and again this year Obenshain voted against bills that would have codified this policy and officially banned discrimination against LGBT people in public employment in Virginia.

Obenshain explained his vote, claiming legal protections against LGBT discrimination would give “an avenue for filing lawsuits and grievances for perceived slights or for no perceived slight at all.” He later opined that it is employers who choose to discriminate – rather than their LGBT employees – who need to be protected.

Then, just this past January, Obenshain walked out of the State Senate, rather than vote on the nomination of openly-gay judge Tracy Thorne-Begland.

Does this sounds like a guy who, as he claims, has “been clear that discriminatory employment practices on any irrelevant basis should not be tolerated in Virginia.” Or, far more likely, is Mark Obenshain simply saying whatever he thinks will help him get elected? Remember, Virginia is now a state where a majority now support same-sex marriage, and an overwhelming majority supports protections against anti-LGBT bias on the job. But not Mark Obenshain, who continues in his far-outside-the-mainstream views on LGBT equality (and so many other issues), as part of a statewide GOP ticket with two like-minded anti-LGBT running mates. Which means that in November, there’s only one thing for us to do: make sure that NONE of these guys gets elected.

P.S. Click on the image above to view two of Mark Obenshain’s anti-LGBT votes.

P.P.S. An Equality Virginia pledge Obenshain refused to sign read, “The sexual orientation and/or gender identity or expression of an

individual is not a consideration in the hiring, promoting, or terminating of an employee in my office.” Wow, pretty radical huh? LOL