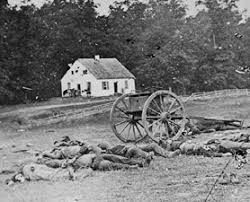 This series* – attempting to show how the political crisis in our times is in some ways a replay of the run-up to the American Civil War – requires that we see that event for what it was.

As a people, we remain intensely involved in that time in our history, though we do not have a clear understanding of it. As a nation, our relationship with that war is unhealthy.

We Americans tend to celebrate the Civil War.  We tend to romanticize it as with Ken Burns’ Civil War series, using the hauntingly beautiful “Ashokan Farewell,” played on the violin, and as with films like “Gettysburg,” with its uplifting music accompanying the slaughter of Pickett’s Charge.

But that sentimentality tends to obscure the reality that this conflict was a national nightmare — perhaps the ugliest event in the civilized world in that period — killing more than half a million American men out of a nation of 27 million. It inflicted wounds that have still not completely healed, as anyone can tell who lives in the South and sees the role played even now by the Confederate Flag.

One way we avoid confronting the darker meanings of that national trauma is by thinking of the coming of that war as a given, as if somehow it was inevitable, that it had to happen. We don’t bother to ask ourselves: Why did this issue of slavery get dealt with so poorly, at such disastrous cost? Why didn’t they work it out? Is one side more responsible than the other for the calamity?

Taking that war as a given obscures how something dark and dangerous, at work in the political culture, drove us toward catastrophe. It wasn’t just because of objective circumstances, rationally considered, that such carnage and national wounding came to pass.

Since, as I maintain, the same dark and dangerous forces are at work in America today, it is important that we peel away the mythology and the sepia-toned gauze and look harder at that war and why it happened.

A good place to start will be looking at what the war was really about, a subject that the South has obscured with deception – and self-deception – for a century and a half.

Andy Schmookler, recently the Democratic nominee for Congress from Virginia’s 6th District, is an award-winning author, political commentator, radio talk-show host, and teacher.  His books include The Parable of the Tribes:  The Problem of Power in Social Evolution.   His website is at www.nonesoblind.org/index.php .