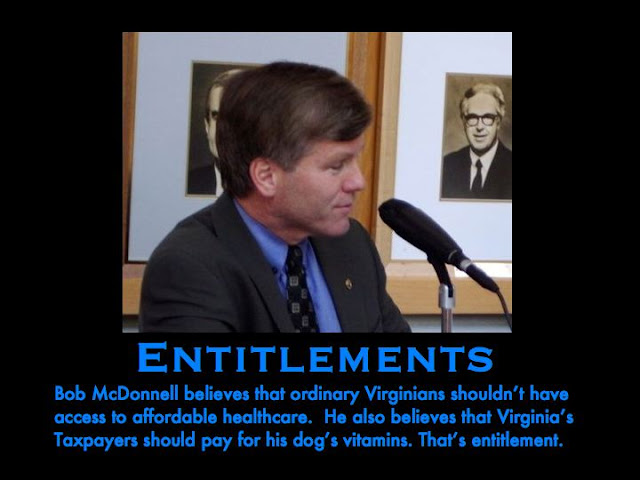 Virginia’s blue-eyed, unmanned aerial drone loving governor, Bob McDonnell, lost any justification for remaining in office after the most recent revelation that he knew about financial assistance and gifts provided by Jonnie R. Williams Sr., Star Scientifics’ CEO. Prior to this ‘discovery’, McDonnell’s defense lawyers argued to federal prosecutors that Virginia’s staggering governor had been “kept in the dark” about the gifts given to his family by Williams.

Now, however, Bob McDonnell has no room to defend himself on the grounds of ignorance regarding the gifts his family received from Star Scientifics’ CEO. The Washington Post gives one example: “McDonnell (R) was present at a charity auction in 2011 when the chief executive of Star Scientific, which makes a dietary supplement, successfully bid on a fashion tour of New York for the governor’s wife in front of a crowd of onlookers, witnesses said.”

With McDonnell’s most clever defense now in the gutter, it’s difficult to imagine how the governor can reason his way into staying on as Virginia’s chief executive. Not only would McDonnell’s resignation spare the people of Virginia any further embarrassment, it may also spare Bob McDonnell from some of the public scrutiny that will surely befall him if he remains Virginia’s governor.

In other words, if McDonnell steps down as governor, he may take some of the spotlight away from the embarrassing details of his relationship with Jonnie Williams Sr.

Up till this point, the majority of both major political parties in Virginia have been cautious about calling for McDonnell’s resignation. There is, however, no further justification for not calling on McDonnell to resign. It is as clear now as it has ever been that Bob McDonnell took financial contributions and gifts in return for political favors (i.e., McDonnell broke the law and the integrity of his office).

So much for the positive legacy of Bob McDonnell.