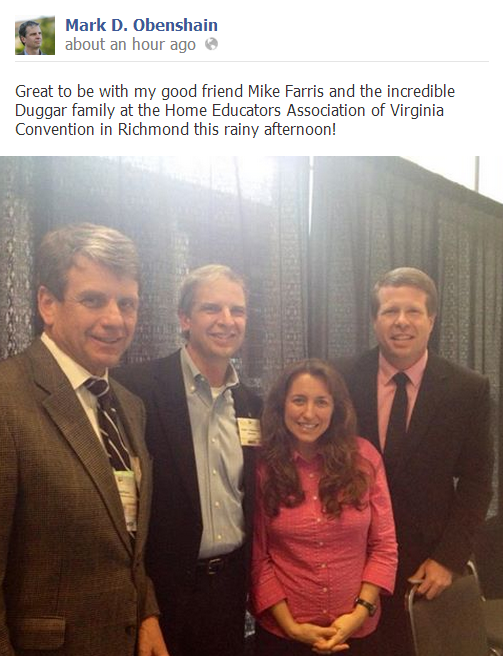 If you haven’t read this morning’s Virginian Pilot endorsement of Mark Herring for Attorney General, I strongly recommend it. Among other things, the editorial board should be commended for not being taken in by Mark Obenshain’s Etch-a-Sketch campaign, in which he ignores, disavows and distorts his loooooooong history of far-right-wing legislation. The editorial  board also isn’t buying Obenshain’s Grade C (D? F?) movie actor attempt to portray himself as a newly reborn moderate. Instead, the Virginian Pilot editorial board calls out Obenshain for what he is:

Obenshain has developed a reputation in the Senate during the past nine years as a legislator who favors ideology over the common interest. That approach has led him to support proposals that tread on shaky legal ground: granting legal rights at conception, mandating photo identification to cast a ballot and gerrymandering Senate district boundaries in an off year, for example.

Obenshain has campaigned in part on a promise to continue Cuccinelli’s tired and unsuccessful fight against the federal Affordable Care Act. The strategy is an irresponsible waste of finite public resources.

Obenshain has deferred to Cuccinelli on other matters in which ideology has trumped reason, including the application of new architectural standards to existing women’s clinics. It was an unsubtle effort to restrict access to abortion by forcing facilities to close or invest in costly, medically unnecessary structural upgrades.

Speaking of women’s health and reproductive freedom, it’s truly astounding how relentless Obenshain’s been for so many years now in pursuing his attempts at telling women what they can and, more to the point, can NOT do with their own bodies. There are a gazillion examples, but here are just a few:

*In 2009, 2010, and 2011, he introduced amendments to prohibit state funding for “any organization providing abortion or abortion counseling services.”

*In 2009, he sponsored a bill to require women to report miscarriages to police within 24 hours or risk going to prison.

*In 2012, he voted for a “personhood” bill that would criminalize many forms of contraception, effectively outlaw all abortions in Virginia, and also make in vitro fertilization and embryonic stem cell research illegal in Virginia.

*Just to make clear that Obenshain’s vote for “personhood” legislation in 2012 wasn’t an aberration, he also sponsored “personhood” bills in 2007 and 2011, to “extend constitutionally guaranteed rights to the unborn from the moment of conception.”

So, next time you hear Mark Obenshain trying to pretend he’s a moderate, and not what he really is – an extremist clone of Ken Cuccinelli – you might want to keep these facts in mind.

P.S. Note the photo of Obenshain with the Duggars and Michael Farris, who among other things, has “close connection[s] to conservative leaders like Jerry Falwell of the Moral Majority, Pat Robertson of the Christian Coalition and Phyllis Schlafly of the Eagle Forum, as well as his adherence to the Quiverfull movement” (on the latter, see The Bizarre Christian “Quiverfull” Movement Pushing Women to Procreate for “God’s Army”).