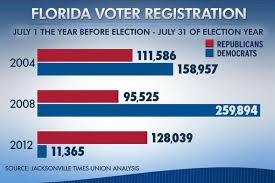 Fellow Democrats, this chart, from The Nation tells the story of the disastrous vote suppression unfolding in just one state. It’s happening throughout this nation. The GOP falsely purports that it must protect Americans from near-zero “voter fraud.” In numerous ways, the GOP has shown itself unfit to be a protector of the vote. And, as always, it turns out that we Democrats must actually protect Americans from Republicans because it is they who take away our freedoms, especially our right to vote.

I have reported on these pages what has happened to the vote in North Carolina. You experienced not that long ago an attempt by the Virginia GA to do a non-scheduled ad hoc gerrymander which would have moved 60% of Virginia voters to different congressional districts. Then recently, Democratic voters were unjustifiably purged from Virginia voter rolls right before the election. Over and over since the Katherine Harris days in 2000 Florida, Republicans have conjured up more ways to deprive lawfully registered voters from exercising their right. We’ve witnessed state after state peel away voters with foreign sounding names, never mind they are actually US citizens. We are the melting pot after all. In Arizona, while Jan Brewer was Secretary of State, she wiped one third of all the voters in Phoenix off the voter rolls. Now she is the governor of Arizona, where a legislator is pushing a two-tiered voting system. It’s a terrible idea and one guaranteed to assure Republican rule at ALL levels indefinitely.

Here’s how it would work. Voters who cannot prove their citizenship (there actually is no iron-clad “proof’ especially when birthers challenge even birth certificates), second tier citizens could only vote in federal elections. Thus states might not not run afoul of federal election law. With especially minorities, immigrants and various assorted other Democratic leaning folks forced into the pool of the second-tier voters, they would never be able to vote for local and state positions.

You can bet the second tier would continue to grow  with a small minority of conservative white Republicans controlling everything but the presidency. The rest of Americans could never vote, muchless run for office for these positions. They could have no influence on redistricting in their states either, meaning that Republicans will officiating over gerrymandering in perpetuity.

You can avoid this by voting Democratic, not just for president and Congress, but this year in Virginia for governor, delegate, state Senator and local offices as well. Let me add that in order to have Dems in charge of the state electoral board, you’d better elect Terry McAuliffe governor. At the local level in Virginia you need to elect Dems too.

There is a difference. One party, the Democratic Party, actually protects the vote. The Republican Party suppress it. It’s that simple. For the foreseeable future, we must elect Democrats at all levels.