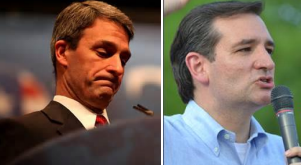 When the President signed legislation late last night saving GOP Speaker John Boehner from his own caucus (the Republican House majority voted against the bill reopening the government and preventing default), Obama sealed the deal for Terry McAuliffe. Chris LaCivita, the Rasputin behind Ken Cuccinelli’s campaign strategy, had been saying for months that he had an “October surprise” guaranteed to win the election for his client.

Back in April, we dismissed the October surprise silliness from LaCivita, rejecting the other gurus claiming – you can look it up – that Cuccinelli was a “sure” winner if he could raise enough money to “go negative” against Terry. At the time, the Washington Post poll had Cuccinelli up double digits. We didn’t believe the polls. Moreover, as we have written, all this stuff about an October surprise, some Cuban Missile Crisis-type event, is the stuff of urban legend. It will no doubt be true someday, but by luck, not by design.

Still, we concede that yesterday Chris got his surprise. And it was in October. Except it wasn’t the kind of surprise he had in mind. Instead, the President signed a bill ending the latest Republican-inspired foolishness in Washington, while also sealing the deal for Terry McAuliffe, the next Governor of Virginia.

This isn’t to say that McAuliffe’s margin of victory will be the same as in the polls; it could be closer. Ralph Northam, of course, will win big. But there is still a chance, if Democrats don’t rally together, for our prediction of a sweep to fall short, if Mark Obenshain manages to squeak past Mark Herring. But THAT SHOULD NOT HAPPEN.

The president did his part by winning the chess match against Ted Cruz and his posse. Now, expect to hear leaks from the Cuccinelli camp that they were “catching up”, that their strategy was “really beginning to work,” but that the whole shutdown/default controversy stopped the AG’s “mo.” It will be a good spin, intended to take Chris and others “off the hook” for the loss.

But it will not be true. At best, what can be said is that these last few weeks froze the race, taking away whatever real power the Obamacare issue might have had for Cuccinelli by diverting attention to DC. The only good news for Cuccinelli: by Monday, the noise will clear from DC, and he will have two weeks to make his Obamacare/Medicaid expansion/negative attacks and whatever else been LaCivita’s closing strategy.

As a general rule, the GOP tends to gain at the end in Virginia — at least this is the data from the elections of Chuck Robb, Doug Wilder, George Allen, Jim Gilmore, Mark Warner and Bob McDonnell. Except for the Wilder campaign, the other winners basically had over 50% in the polls two weeks out, it was just a margin of victory difference. Wilder had a shaky lead at best, never over 50%, a classic equation to lose at the end to a GOP surge. It almost happened, so this is always a sobering stat.

The 2013 race is of course complicated by a third-party candidacy that for some reason is being promoted as a responsible third alternative by the media. My own gut is that it helps Terry, but at 200-proof, we write about politics, not our own choices. We don’t judge, we just analyze.

This, then, is the first year since 1965 when a Virginia GUV candidate can win with less than 50% of the vote. But this is more a complication for the AG’s race, not the GUV race, in terms of predicting the winner. As for the LG race, that was over the moment Jackson was nominated at the Virginia Republican convention last May.

Bottom line: The President just sealed the deal for Terry McAuliffe. Can Terry get most of the folks who backed Warner and Kaine? If he can, then a sweep seems a sure thing in this three-way race, along with a likely record percentage victory margin for a Democrat in the two-party era.

But whether it is over 50% or under 50%, the President, by outplaying the Cruz/Cuccinelli side of the GOP, did two things besides avoiding a debt default: 1) he put an end to the government shutdown; and 2) he shut down the Cuccinelli for Governor campaign.