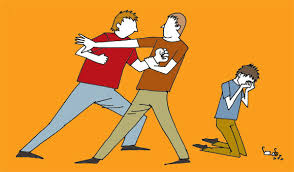 As I write this, there is a shred of uncertainty about whether President Obama will continue until the end standing firm on his position that there will be no concessions made to hostage-takers. I hope he gives not an inch on that.

Regardless, the unfolding of this crisis proves quite clearly that the best way to disempower the dark spirit that drives these right-wing bullies is to take the right stand and then stand one’s ground.

Here once again we see a recapitulation of the drama leading up to the Civil War.

Arguably, the Northerners of the years before the Civil War were less cowed by the Southern bullies than the Democrats of our times have been by the Republicans. But the Southerners believed that, though the North might complain about the South’s breaking up of the Union, when push came to shove they would back down. The Yankee might get upset and sue you, one Southerner said, but he won’t fight.

What they hadn’t counted on was the extraordinary quality of character of Abraham Lincoln.

Lincoln was an unusually humane and conciliatory person. That came through in all his communications to the South prior to the outbreak of the war. But he was also resolute.

On certain essential points, he was not going to yield: 1) he would not bother slavery where it was already established, he said repeatedly, but he was resolved to oppose its expansion into new territory; 2) while he implored the Southerners to give him a chance to prove that he would respect their rights, he maintained that those rights did not include the right to unilaterally break up the Union he was obliged by oath to preserve.

Lincoln held out olive branches, and he did not attack. But neither did he retreat from the ground he clearly staked out. He did not yield Fort Sumter, in the harbor of Charleston, in the first state to secede, and he did not allow the men stationed there to be starved out. But he did not try to fortify it for a fight, and it was not he but Jefferson Davis who gave the order that commenced the violence that would last for four years.

And that would destroy the Slave Power the Southern bullies had set out to advance.

By staking out morally defensible ground, and then standing up to the bullies, President Lincoln made himself into the rock on which the bullies — becoming reckless, over-reaching — would founder.

Now, in America, another president has (so far) finally — after caving time and again — stood his ground. The Republicans, it seems, gave no credence to President Obama’s repeated statements that he would not pay any ransom demanded by bullying extortionists.

So the bullies kept on coming, counting on the president’s being intimidated. But President Obama — having staked out an appropriate position in defense of the American constitutional order — stood firm against the attack.

And once again, the bullies are destroying themselves. (“We could be witnessing the death throes of the Republican Party,” writes John B. Judis yesterday in The New Republic.)

It’s highly unlikely that this one battle will end the war, but it shows how those who would preserve the democratic constitutional system that is our heritage, should fight it. When the bullies come at you demanding you yield ground that should not be given them, stand firm.

Let their ship break apart on the reef of your steadfast resolve.

Andy Schmookler, recently the Democratic nominee for Congress from Virginia’s 6th District, is an award-winning author, political commentator, radio talk-show host, and teacher. His books include The Parable of the Tribes: The Problem of Power in Social Evolution. His website is at www.NoneSoBlind.org