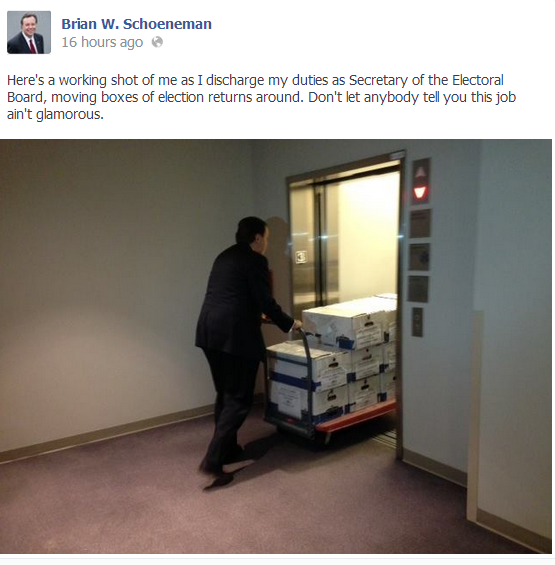 No, I can’t believe I’m writing a story with that title. Just a bit of background as to why that’s the case. First off, Schoeneman is a Republican blogger and a former candidate for House of Delegates with whom I disagree on just about everything (with the exception of labor unions, which he apparently supports). In addition, Schoeneman was banned at Blue Virginia for a bunch of reasons that can be boiled down to “being a troll by almost any definition of that word.” As if all that’s not bad enough, Schoeneman also has repeatedly launched outrageous attacks on Miles Grant and on the rest of us here at Blue Virginia, for supposedly “exploit[ing] major tragedies for political gain.” Of course, this is a specialty of Republicans, but we’ll leave that argument aside for the time being.

The fact is that all those charges are absurd and offensive – Blue Virginia does not “exploit” things, let alone tragedies. To the contrary, I’d say we have been extremely restrained over the years; see our Virginia Tech coverage, for instance, which I am proud of to this day. Anyway, the point is that Brian Schoeneman is not exactly Mr. Popularity over here, and was banned by unanimous vote by the Blue Virginia front pagers (one of the easiest calls we ever made, although I reversed it several months ago, just to see if he’d changed at all). More broadly, this is the type of guy I generally don’t trust as far as I can throw, as the saying goes – if he told me water was wet, I’d really start to question whether it might just be dry. You get the picture.

So that’s why the LAST thing I ever thought I’d be doing is defending this guy. Yet here I am, doing just that. Why? Because – and I’m pleasantly surprised (shocked?) to say it – Schoeneman’s been acting with utmost integrity, from what I can gather, in his role as a member of the Fairfax County Electoral Board in the tighter-than-a-tick Virginia Attorney General’s race. Believe me, I was ready to pounce after I saw this photo, and after having read of supposedly “missing” and/or “uncounted” absentee ballots not just from Fairfax County, but from the most Democratic part of the County. I’ll admit, I was highly suspicious. Still, I thought it was important to hold off on accusing anyone of anything until proof came to light, if it ever did. Well, it didn’t. To the contrary, Schoeneman has by all accounts been acting in a totally professional, ethical, above-board manner that appears to be a model for how electoral board members should act. And for that, he deserves praise, especially when far-right-wing Tea Partiers like Jeanine “Lovettsville Lady” Martin (notorious for her ill-informed, ridiculous remarks on conservative Virginia blogs) start attacking him, like this crapola:

Brian Schoeneman, Secretary of the Electoral Board in Fairfax County, has extended the deadline for contesting provisional ballots from Friday at noon until Tuesday…My first question, does Brian’s decision open a whole can of worms for every jurisdiction in the state?  Will every jurisdiction now extend the deadline for provisional ballots?  My second question, why is Brian Schoeneman, who purports to be a republican,  helping democrats by extending this deadline?

I’m sorry, but that’s just laughable. As Schoeneman writes in reply to this drivel:

Jeanine, you have no idea what you’re talking about, as usual.

There is no “deadline for contesting provisional votes.” That’s not what we are talking about. The only deadline in the law is that all copies of IDs for those who were given Voter ID provisionals be provided to our office by noon on the Friday after the election. We have abided by that deadline, and any voter who voted provisionally because of an ID issue who failed to meet that deadline will not have their vote counted.

All other voters who voted provisionally are free to present any additional information – either in person or in writing – about why they think their provisional should be counted. We have been postponing our final votes on those provisionals to allow people – both Republicans AND Democrats – time to get here and present their case to the board if they so choose.

Etc, etc., etc. (Schoeneman’s style is to be extremely wordy and repetitive, and to always but ALWAYS make sure he has the last word on everything; no wonder he’s a lawyer – lol). To date, all the evidence is that Schoeneman has been doing just that – as he puts it, ‘trying to do right by the voters in Fairfax County,”which is what I swore an oath to do.” Heck, even Greg “Black Velvet Bruce Li” Letiecq, about as hard-right as you can get this side of Attila the Hun, weighs in to defend Schoeneman, asking “Do we so blithely cast away our principles just because it might yield a momentary partisan advantage?“, and adding, “[Brian Schoeneman] swore an oath to uphold the law and serve justice, and he is doing that. Brian is demonstrating a level of honor and dedication people of both parties should seek to emulate.”

So, not only am I defending Brian Schoeneman this morning, something I never thought I’d do, but I’m also agreeing with Greg Letiecq, which I figured would happen about when hell froze over. Well, come to think of it, it IS pretty cold outside this morning, so you never know. LOL