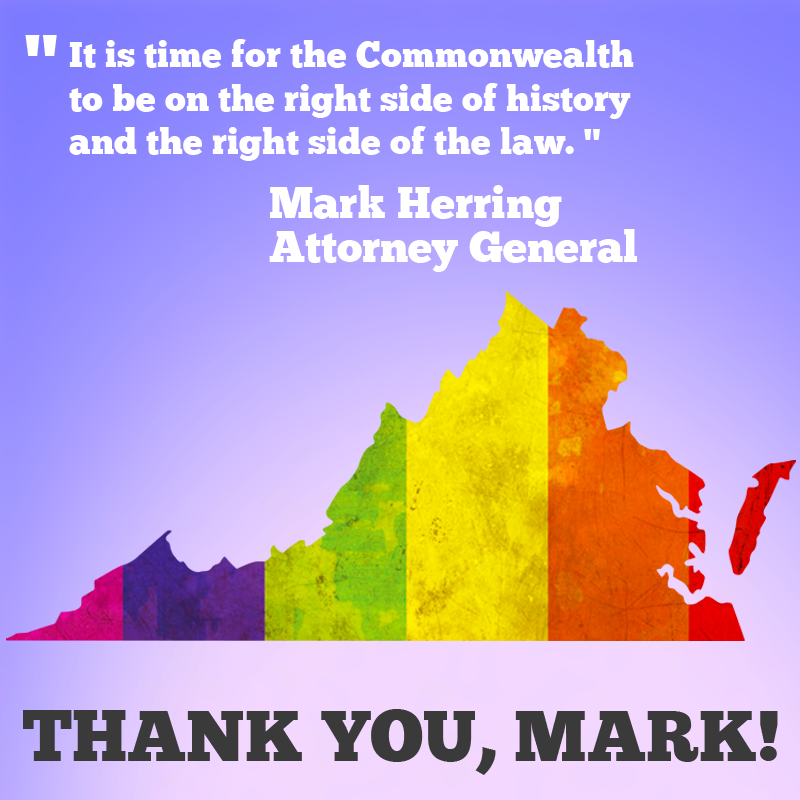 Great work by Virginia Attorney General Mark Herring; I’m prouder today than ever for having supported him and worked to get him elected. 🙂

“Today was a very significant day in the journey towards full equality under the law for all Virginians. I am proud to say that the Commonwealth of Virginia stood on the right side of the law and the right side of history today in opposing this discriminatory ban.

“This case is fundamentally about whether Virginia can legally treat same-sex couples as second-class citizens, or whether the U.S. Constitution truly guarantees equality under the law. But this is more than an abstract legal debate. The answer to this question affects the lives of thousands of Virginians who are our friends, our neighbors, coworkers, fellow parishioners at our churches, our brothers and our sisters, and they deserve to be treated exactly the same as all other Virginians.

“Although we have much to be proud of, there have been times where brave Virginians have led the fight for civil rights while their state stood against them. Whether it was the right to a public education regardless of race, the right to marry the person you love regardless of skin color, or the right to attend state colleges and universities regardless of gender, Virginia has too often found itself on the wrong side of landmark civil rights cases. The injustice of Virginia’s position in those cases will not be repeated this time. Today, the Commonwealth of Virginia got it right.”

.@FairfaxDems Chair @BryanGrahamVA On the Virginia GOP’s Voter Intimidation Efforts Saturday: “I’ve never seen anything like this. I would never ask our volunteers to do anything like this.” https://bluevirginia.us/2020/09/fairfax-county-democratic-committee-chair-on-the-gops-voter-intimidation-efforts-saturday-ive-never-seen-anything-like-this-i-would-never-ask-our-volunteers-to-do-anything-like-this via @bluevirginia

“Virginia GOP” Is Trending On Twitter…and NOT For Any Good Reasons! LOL https://bluevirginia.us/2020/09/virginia-gop-is-trending-on-twitter-and-not-for-any-good-reasons via @bluevirginia