More great work by Virginia Attorney General Mark Herring – thank you! Also, check out the “flip” of this post for selected quotes from Virginia’s brief in the Bostic case (oral arguments will begin on May 13). As Herring’s office says, “Hopefully this will make it a little easier to identify the conclusions of the Commonwealth’s arguments, as well as some of Attorney General Herring’s more noteworthy points.” 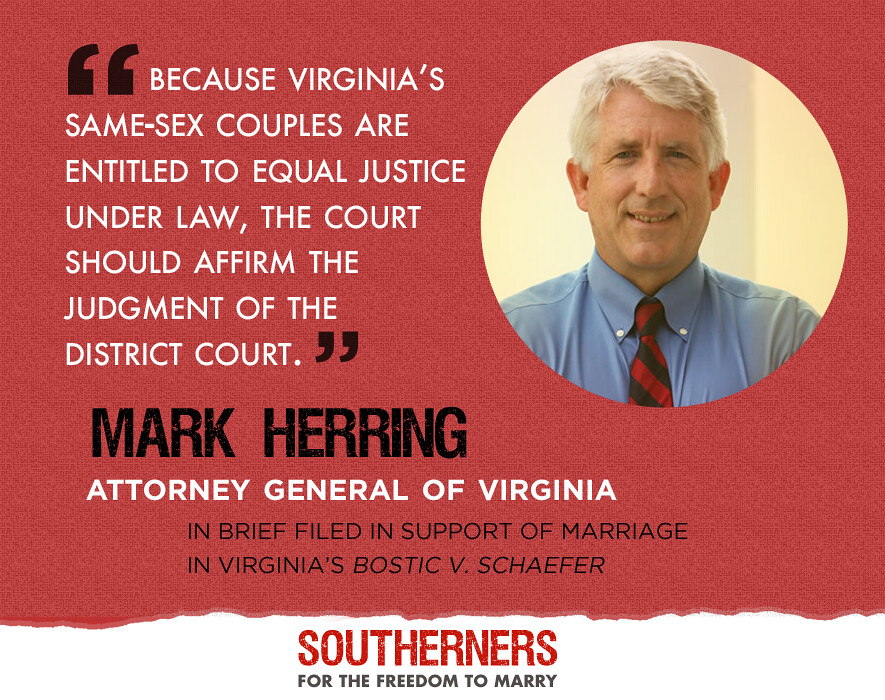 *This Court should affirm the district court’s decision because it correctly held that Virginia’s ban on same-sex marriage could not satisfy rational-basis review, let alone heightened or strict scrutiny. [Pg. 13]

*Although the Attorney General agrees that Virginia’s ban is unconstitutional, he has made clear that Rainey will continue to enforce the ban until a definitive judicial decision can be rendered. [Pg. 15.]

*And the zealous defense of the ban by Schaefer and McQuigg, and by their twenty-one amici, ensures that this Court has the benefit of a “sharp adversarial presentation” of the issues. [Pg. 16]

*All individuals means all individuals. Loving teaches that the Fourteenth Amendment protects the  fundamental right to marry, even if the way in which it is practiced would have surprised the Framers or made them feel uncomfortable. [Pg. 21]

*As Judge Shelby put it: “[b]oth same-sex and opposite-sex marriage are . . . simply manifestations of one right-the right to marry-applied to people with different sexual identities.” Kitchen, 961 F. [Pg. 24]

*The Commonwealth agrees that heightened scrutiny is the proper test for laws that discriminate based on sexual orientation. [Pg. 26]

*What the Federal Government said in Windsor cannot be denied: “[g]ay and lesbian people have suffered a significant history of discrimination in this country.” Brief of the United States, supra note 15, at 22. “No court to consider the question has concluded otherwise, and any other conclusion would be insupportable.” [Pg. 28]

The district court was correct when it recognized that prejudice against gay people in Virginia has tended “seriously to curtail the operation of those political processes ordinarily to be relied upon to protect minorities[.]” Bostic, supra, at (JA 382) (quoting United States v. Carolene Prods. Co., 304 U.S. 144, 152 n.4

*(1938)). For example, Virginia’s hate-crime law does not protect against crimes motivated by sexual-orientation bias. Neither Virginia’s Human Rights Act21 nor its Fair Housing Law prohibits discrimination on the basis of sexual orientation. And repeated efforts have failed to expand those laws to protect gay citizens. In fact, the prior Virginia Attorney General catalogued those repeated failures (JA 180 n.4) as evidence of Virginia’s “consistent public policy” not to recognize sexual orientation “as a protected class” (JA 181), advising Virginia’s colleges and universities to remove sexual orientation as a protected class from their existing anti-discrimination policies. (JA 181-82.) [Pg. 33-34]

*”As political power has been defined by the Supreme Court for purposes of heightened scrutiny analysis, gay people do not have it.” Obergefell, note 9 supra, at *55. The fact that the Attorney General of Virginia has now taken up their defense does not mean that laws discriminating against gay people are no longer “suspect,” any more than courts stopped applying strict scrutiny to racial discrimination when Attorney General Robert F. Kennedy urged passage of the Civil Rights Act of 1964. [Pg.35]

*Courts are suspicious of laws that discriminate based on race, national origin, gender, alienage, and illegitimacy. Such classifications are “suspect” because, in our nation’s history, they often spring from prejudice. So we put a heavy burden on the State to justify them. It is simply not credible to argue that courts have no similar reason to be suspicious of laws that discriminate on the basis of sexual orientation. [Pg. 36]

*Although McQuigg argues there is no gender classification here because “both sexes are treated equally” (McQuigg Br. 18), the Supreme Court rejected the same argument in Loving. In Loving, Virginia’s Attorney General claimed that the Commonwealth’s ban on interracial marriage treated the races equally because Virginia “punished equally both the white and the Negro participants in an interracial marriage.” [Pg. 37]

*In writing its opinion, this Court should reject the pejorative phrases “genderless marriage” and “marriage-mimicking construct” that McQuigg (but not Schaefer) uses to describe the core freedom at stake here. (McQuigg Br. 6-7.) Marriage between gay people is no more “genderless” than marriage between heterosexuals; gender plays a vital role. And Plaintiffs do not seek to mimic marriage; they seek to marry. Calling it “genderless” and “marriage mimicking” is insulting, “just as it would demean” heterosexuals to say that their marriage is “simply about” opposite-sex “intercourse.” Lawrence, 539 U.S. at 567. [Pg. 38]

*Many good and decent Virginians undoubtedly voted for the Marshall-Newman Amendment because of sincerely held religious beliefs that homosexuality is wrong or that gay marriage conflicts with Biblical teachings. For them, the ban ensured that their “strongly held values” are “reflected in the law.” (U.S. Conference of Catholic Bishops Br. 29-30 (Doc. 95-1).) But religion cannot justify State-sponsored discrimination… recognizing that the Constitution prevents the State from enforcing such beliefs does not pronounce the beliefs themselves “illegitimate.” (U.S. Conference of Catholic Bishops Br. 30.) It simply recognizes that such views cannot deprive other citizens of their rights. It should go without  saying that striking down Virginia’s ban will not obligate religious institutions to perform same-sex weddings. [Pg. 39-40]

*Second, McQuigg’s procreation-channeling theory cannot justify Virginia’s ban because it is irrational to think that banning same-sex marriage will make heterosexual couples more likely to marry and have children of their own. [Pg. 43]

In the record in this case (not to mention every other case), “[n]o one has offered any evidence that recognizing same-sex marriages will harm opposite-sex marriages, individually or collectively.” Bourke, note 9 supra, at 36-37. [Pg. 44-45]

*Third, the responsible-procreation/optimal-child-rearing rationale is outright demeaning to both same-sex and opposite-sex couples. It tells those who are not interested in having children, or unable to have them the “natural” way, that their relationships are less important, if not “unworthy.” Windsor, 133 S. Ct. at 2694. It also “humiliates tens of thousands of children now being raised by same-sex couples,” making it “even more difficult for the children to understand the integrity and closeness of their own family and its concord with other families in their community and in their daily lives.” Id. [Pg. 45]

DeBoer found that the expert witnesses called by Michigan to support its same-sex-marriage ban failed to apply scientific methods and lacked credibility. DeBoer, note 9 supra, at 19-30. The court found the testimony of Michigan’s lead witness, sociologist Mark Regnerus, “entirely unbelievable and not worthy of serious consideration,” id. at 22, and that a recent study he completed was unreliable because, among other reasons, it was rushed through for a third-party funder for use in litigation. Id. at *22-23. Many of the Clerks’ amici cite Regnerus’s work without mentioning the district court’s scathing criticism in DeBoer. (Soc. Sci. Profs. Br. (Doc. 83-1); Alvare Br. (Doc. 88-1); Liberty Counsel & Am. Coll. of Pediatricians Br. (Doc. 91-1); Lopez Br. (Doc. 100-1).) [Footnote 24; Pg. 26-47]

*McQuigg (but not Schaefer) argues that the ban is justified by the State’s compelling interest in protecting children, but she fails to explain why it has a compelling interest in excluding gay people from marriage, thereby making it harder for gay parents to raise their children. (McQuigg Br. 34.)… And McQuigg does not even mention the legal and economic benefits of marriage that are locked away from same-sex couples-such as spousal privilege, tenant-by-entirety ownership, inheritance rights, statutory beneficiary status, and medical decision-making authority, to name a few. [Pg. 48]

*It takes only a moment’s reflection to realize that the Fourteenth Amendment necessarily trumps the federalism claim… And when the Court in Windsor discussed the States’ traditional role in regulating marriage, it made clear, citing Loving, that “State laws defining and regulating marriage, of course, must respect the constitutional rights of persons.” 133 S. Ct. at 2691 (emphasis added). [pg. 51-52]

*The Clerks and many of their amici resort to slippery-slope arguments, warning that, if States cannot ban same-sex marriage, they will have to allow plural marriage, marriage between siblings, and marriage to young children. Virginia’s counsel raised the same specter in Loving, arguing that Virginia’s “prohibition of interracial marriage” stood “on the same footing as the prohibition of polygamous marriage, or incestuous marriage or the prescription of minimum ages at which people may marry and the prevention of the marriage of people who are mentally incompetent.” These tactics are no more persuasive in 2014 than they were in 1967…no bogeyman can justify denying same-sex couples the right to marry when marriage equality is compelled by cases like Loving, Romer, Lawrence, and Windsor. [Pg. 55-56]

*As Romer shows, the fact that a discriminatory law is embedded in the State’s constitution does not insulate it from being struck down under the Fourteenth Amendment. [Pg. 57]

*The equality-of-right principle in the Fourteenth Amendment is not frozen in time. Its application does not depend on how we think the Framers might answer our legal questions. If it did, the Constitution would not today forbid segregated schools, ensure the freedom to marry persons of a different race, or guarantee equal justice in countless other situations that the Framers did not anticipate. [Pg. 59]

*Because Virginia’s same-sex couples are entitled to equal justice under law, the Court should affirm the judgment of the District Court. [Pg. 60]