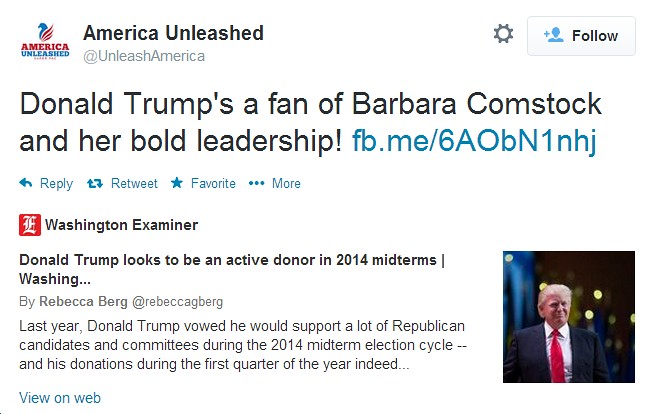 Perfect timing for racist nutjob Donald Trump to weigh in, just hours after the editorial, Northern Virginia lurches to the right, appeared in this morning’s Washington Post:

Ms. Comstock also supported legislation that would have required women seeking abortions to undergo transvaginal ultrasounds. She backed a measure intended to outlaw abortion by granting individual rights to an embryo from the moment of conception. She voted to repeal a law limiting handgun purchases to one per month. And she opposes expanding Medicaid, which would provide health coverage for up to 400,000 uninsured Virginians.

Being a sycophant to Mr. Limbaugh is bad enough; it’s even worse when the sycophancy is based on a fabrication…

Ms. Comstock’s past primary votes are her business. But by jockeying to appeal to the most extreme fringe of the electorate, Republicans run the risk of alienating centrist, level-headed and educated voters in the 10th District.

Of course, Trump is just the latest in a long line of extremists, warmongers, bigots, and right-wing hate radio hosts to endorse Comstock. The question is, will 10th CD voters lurch to the right, as the Post warned this morning, or will it elect the sane, sensible, capable John Foust in November? Is this like THE easiest rhetorical question ever? LOL