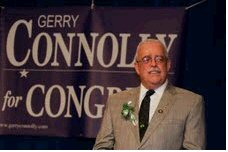 Not that Bill “ALEC” Howell and the GOP beard brigade in the House of Delegates will listen, but good for Rep. Connolly for trying!

FAIRFAX – With the Virginia General Assembly scheduled to return to Richmond next week for a special session, Congressman Gerry Connolly (D-VA) today wrote to all 140 members of the legislative body urging them to “put aside partisan ideology and political posturing to do what’s right for Virginia” and approve a Medicaid expansion plan for the Commonwealth funded by more than $9 billion in federal dollars.

“How can we sleep at night knowing that a vote against Medicaid expansion will deny chemotherapy drugs to cancer patients in need, force many Virginians to ignore their acute medical conditions, and continue to increase the financial burden on emergency rooms and hospitals, particularly in rural areas of the Commonwealth?” Connolly asked.

“How can any elected official turn a blind eye to the pleas and needs of our own constituents, especially in the House where delegates from the majority represent 32 of the 50 House districts in Virginia with the highest percentage of Medicaid recipients?” Connolly said.

“How can fiscally-prudent Virginia legislators look each other in the eye knowing they are preventing Virginia from accepting $5 million a day in federal funds and those tax dollars, paid by Virginians, are being turned over to fund Medicaid expansion programs in other states?”  the Virginia congressman asked.

“There is no rational reason to turn down more than $9 billion to help as many as 400,000 Virginians in need, while saddling state and local governments, families and businesses, and local hospitals with an additional $1.65 billion per year for the cost of uncompensated care for the uninsured,” Connolly said.  “It makes no sense, financially or morally, as business leaders, Chambers of Commerce, religious groups, hospitals, and other organizations across the state have made clear,” Connolly said.

“All the risks of Medicaid expansion have been addressed.  Critics can no longer use the excuse that they are afraid the federal dollars will dry up and the Commonwealth will be left holding the bag, considering that the U.S. Department of Health and Human Services has said, in a letter to Governor McAuliffe, that Virginia can opt out of the program if the federal government doesn’t uphold its end of the bargain,” Connolly said. “The arguments against accepting the federal Medicaid funds are even more perplexing given the fact that Virginia ranks second of all states in the amount of federal funds it receives on a per capita basis and funds 25 percent of its state budget with federal funds.”

The Congressman from Fairfax County said, “It is irresponsible to leave billions of dollars on the table and hundreds of thousands of Virginians uninsured.  It is time to put aside the partisan warfare focused on making our President and our Governor look bad at the expense of our citizens.  It is time to practice common-sense governing and reach agreement on this vital issue that can dramatically affect the health and wellbeing of 400,000 fellow Virginians.”