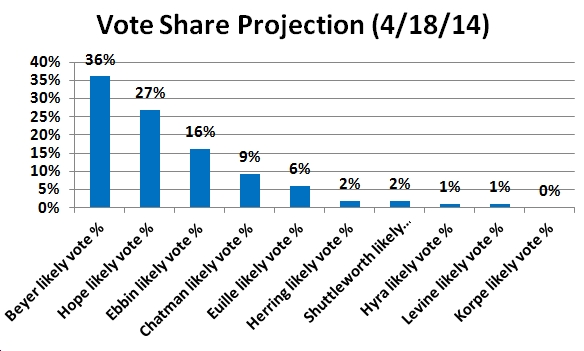 I was playing with numbers in the 8th CD Democratic primary, and came up with a couple scenarios for final results that seem plausible to me. Both scenarios assume that Fairfax County plus Falls Church will make up 42% of the vote; Arlington County 36% of the vote; and Alexandria 22% of the vote. In Scenario 1 (click on image to “embiggen”), Don Beyer wins Fairfax/Falls Church 48%-20%-17% over Patrick Hope and Adam Ebbin, respectively; Ebbin wins Alexandria 23% over Beyer, Lavern Chatman and Bill Euille at 20% each; and Hope wins Arlington with 45% of the vote over Beyer with 32% and Ebbin with 11%.

In Scenario 2 (click on image to “embiggen”), Beyer wins Fairfax/Falls Church with 41%, while Hope and Ebbin tie at 23%; Ebbin wins Alexandria with 23% over Beyer, Chatman and Euille at 20% each; and Hope wins Arlington with 35% over Beyer (30%) and Ebbin (25%). This is basically the “Ebbin’s Being Underestimated Scenario.” In this scenario, Ebbin surges in Arlington, going from 11% in Scenario 1 to 25% in Scenario 2, and cutting into Hope’s Arlington share (goes down from 45% to 35%). I don’t think it’s highly likely that will happen, but it’s possible. Plus, I’m never going to underestimate Adam Ebbin, having done that once before (in his Senate primary against Rob Krupicka and Libby Garvey), which Ebbin won in come-from-behind fashion. 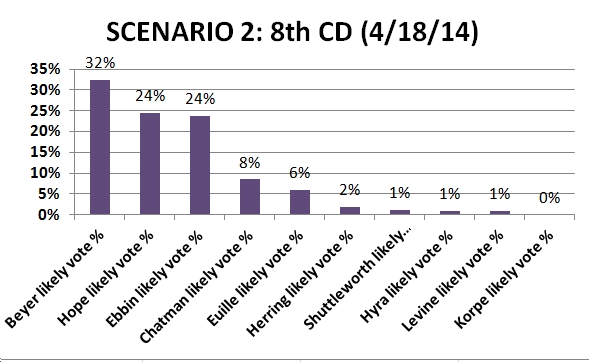 As for the other candidates, let’s just say that in playing around with the numbers – which are based on whatever information I’ve been able to glean from the various campaigns, FEC reports, etc., plus discussions with knowledgeable Dems – I’m not seeing paths to victory for them. The problem for the Alexandria candidates (with the exception of Don Beyer, who really isn’t an Alexandria candidate per se; even though he lives in Old Town now, he has a much wider profile for a variety of reasons, such as that he was LG for two terms and ran for Governor), is that there are so many of them, meaning they cannibalize each others’ support in Alexandria, plus they don’t have much name ID outside of Alexandria, and most don’t have the financial resources to gain that name ID over the next 7 weeks.

Note that these are nothing more than my best guesses at the moment, that a LOT can change, and that I could be wildly wrong. I’d love to hear your (substantive) responses, based on your own analysis of the numbers and how the election might play out. Thanks.

P.S. It’s worth noting that in the 2013 Democratic LG and AG primaries, Arlington accounted for 39.5% of the vote, Alexandria for 24.8%, and Fairfax/Falls Church for 35.7%. In my scenarios, Arlington is 3.5 points lower, Alexandria 2.8 points lower, and Fairfax/Falls Church 6.3 points higher. If the shares are closer to the 2013 primary, that would tend to help Patrick Hope and hurt Don Beyer. We’ll see…