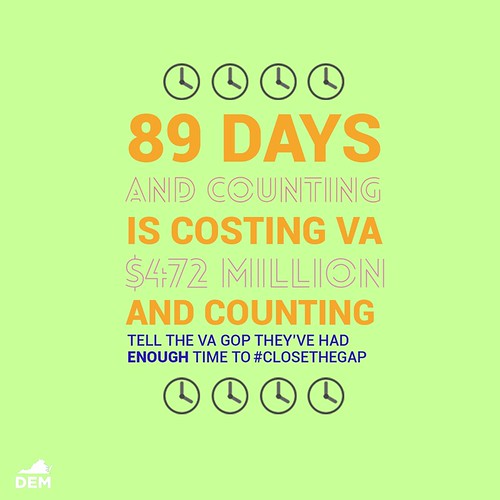 From the Virginia Senate Democratic Caucus. Now, can the Republican-controlled House of Delegates PLEASE do its job for a change?!?

RICHMOND — This morning, the Senate Finance Committee voted on a bipartisan basis to report a new budget that would use the Senate’s private option approach — Marketplace Virginia — to close the health care coverage gap, enabling up to 400,000 uninsured Virginians to access health care. The final vote was 11 – 3, with three Republicans joining all eight Democrats in supporting the budget.

The bill retains several of Gov. McAuliffe’s critical amendments, including a 2% pay increase for public employees, allowing up to $17 million in subsidies to local governments for Line of Duty Act-covered employees, and providing up to $7.1 million for additional land conservation efforts.

Said Sen. Janet Howell (D – Reston), “Today, Senate Finance compromised yet again. We could have voted to expand Medicaid, but instead we voted for a bipartisan alternative that encourages personal responsibility and relies on the private sector. House Republicans need to come to the table and offer something in return. That’s how governing works.”

Said Sen. Mamie Locke (D – Hampton), “House Republicans need to understand that the Senate will not negotiate with itself. During regular session, the Senate put forward a good-faith, bipartisan proposal that addressed House Republicans’ concerns with Medicaid expansion. House Republicans shot down that proposal, and they’ve failed to offer any alternative. Now that proposal will be before them again, and it’s once again up to them to come to the table and work with us to move Virginia forward. If they do that, I’m confident that we can reach an agreement. If they don’t, nothing will change.”

Said Sen. Louise Lucas (D – Portsmouth), “As legislators, we are elected to solve Virginia’s problems. The coverage gap is a great and growing problem, and it hurts businesses and families across the Commonwealth — whether or not they pay for health insurance right now. Today, Senate Finance once again offered a compromise solution to that problem — and once again, House Republicans have to decide which matters more: helping those Virginians, or hiding behind narrow, ideological objections in order to justify doing nothing.”