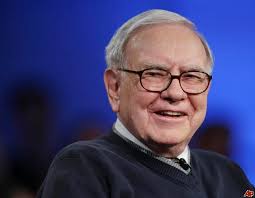 AN OPEN LETTER TO WARREN BUFFETT

Several years ago, you did the nation a good service by declaring, “There’s class warfare, all right, but it’s my class, the rich class, that’s making war, and we’re winning.” Good for you for helping Americans see through the propaganda that seeks to disable us from protecting our democratic heritage.

I am sure you’ll agree, however, that since then things have unfortunately grown worse in terms of the ability of the rich to substitute “one dollar, one vote” for “one person, one vote.” Since then, for example, we’ve had the atrocious Citizens United decision, opening the floodgates wide for plutocracy to subvert our democracy.

And nowhere is this subversion more grotesquely on display than with the Koch Brothers’ use of their riches to move our government in ways of their choosing. Using organizations like ALEC and Americans for Prosperity, the Koch Brothers are working systematically to take this country in directions contrary to our basic democratic values and (for example in the case of climate change) contrary to the long-term interests of the American people.

In view of this serious threat to rob the American people of their birthright, as members of a democratic society and inhabitants of a healthy planet, I would like to call upon you to make the following public announcement:

America doesn’t belong to us billionaires, and it shouldn’t be possible for us to buy our democratic government. But that seems to be what the Koch Brothers are trying to do.

So, for the sake of our democratic values, I’m going to use my money to neutralize their efforts. Wherever they put their money to move our government in the direction they want, I’ll put my money to move it in the other direction.

Hopefully, these efforts will cancel each other out and the field will be left for the American people to choose their destiny.

You’ve made an admirable commitment, Mr. Buffett, to see to it that your vast fortune will be used for philanthropic purposes. But I would suggest that there is no greater service you could render not only to America but to humanity in general than to help restore political health to this, the world’s leading nation.

If the United States continues down the road toward becoming a nation in which the few rule, manipulate, and exploit the many, how many good and humane causes will do well?

If the Koch Brothers succeed in paralyzing this nation’s ability to act responsibly in the face of climate change, how far will the efforts of the Gates Foundation, to which you’ve promised so much of your fortune, go to ameliorate the suffering of the hundreds of millions in the poor countries that will bear much of the brunt of a climate disaster?

This is surely a case where an ounce of prevention will be worth a pound of cure.

Here’s the emergency. I hope you will step up and, with your usual forthrightness, make that announcement on behalf of all Americans, and of the vision of our Founders.