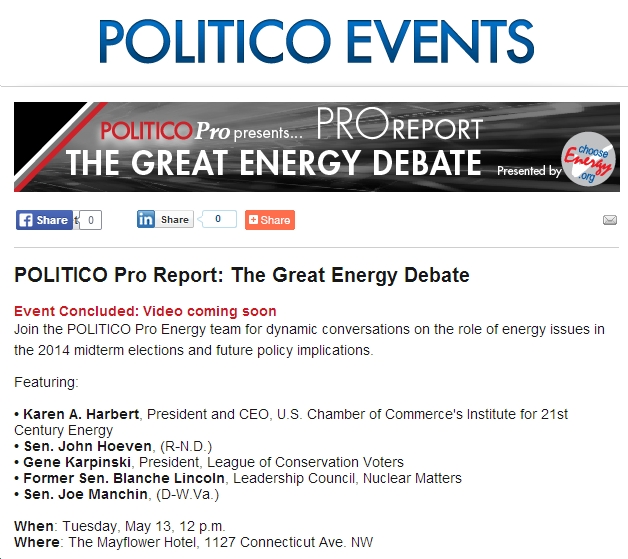 There’s so much wrong with the corporate media, it’s hard to know where to start. But let’s take an event like Politico’s “Great Energy Debate” as a “great” example of how unfair and unbalanced these people are. For starters, note that the speakers include four – count’em, FOUR! – speakers (Joe “Coal Champion” Manchin, Blanche “Looking Out for Big Oil” Lincoln, Karen Chamber of Commerce/Bush Administration Fossil Fuel Shill Harbert and John “Keystone Tar Sands Pipeline” Hoeven) on the strongly pro-fossil-fuel side of things, with just one – count’em, ONE – speaker (Gene Karpinski, President, League of Conservation Voters) on the pro-environment/pro-clean-energy side.

Is a 4:1 advantage for the pro-fossil-fuel, anti-clean-energy side fair and balanced? Think of it this way: would you want to play a baseball game in which your team had two fielders (plus a pitcher) and the other team had 8 fielders (plus a pitcher)? Would you put your fielders at shortstop and first base and pray that nothing was hit to the outfield? Yeah, it’s funny to think about, but so is this farcical “great energy debate.” Adding to the farce is that the “debate” was sponsored by a group called ChooseEnergy.org. Who the heck are they, you ask? How about “an affiliated project of [the American Petroleum Institute – API] and [API’s ubiquitous pro-fossil-fuel propaganda campaign] Energy Tomorrow.”

Anyhoo…that’s how the supposedly “liberal media” conducts a “debate” on energy — wildly stacked in favor of wealthy, powerful fossil fuel interests, with not a single representative from the clean energy industry and only one from the pro-environment side. It’s totally unfair and wildly unbalanced, and it’s not even Fox “News.” Instead, it’s the Washington insiders’ “bible” (that really says it all), Politico. Given this type of irresponsible “reporting,” is it any wonder the American people are misinformed about energy and climate issues? Shocker, I tell you!

P.S. This takes the media’s usual “false equivalence” (one person says the earth is flat, another says it’s round) to another level – four people say “fossil fuels are great” and “what climate change?”; one says “hey, don’t forget about me!”