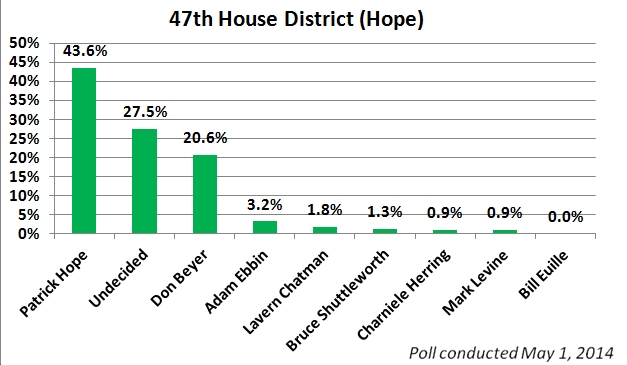 I posted the first installment of our exclusive 8th CD Democratic primary poll a bit earlier today. See here for more details on the poll in general (e.g., it was telephone/automated, with calls conducted by Voice Broadcasting), as well as on results for Charniele Herring’s House of Delegates district specifically. Also see here for details on Alexandria, and here for details on Adam Ebbin’s State Senate district.

Now, we turn to Patrick Hope’s House of Delegates District (the 47th), which covers mostly North Arlington and perhaps will constitute around 20% of the Democratic primary electorate on June 10th. Hope has represented this district since 2010. See the graph and comments for my thoughts. Also note that there were 218 respondents specifically in the 47th House of Delegates District (out of 1,152 total responses). The margin of sampling error on this section of the poll is +/- 6.1 percentage points.

*This is exactly what Patrick Hope needs to be doing in his own House of Delegates district (and what Bill Euille, Charniele Herring and Adam Ebbin aren’t doing on their home turfs) — racking up a big margin, over 40% of the vote in a 10-candidate field, 23 points ahead of Don Beyer and 40 points ahead of Adam Ebbin. That’s without having done any serious paid communications yet, to my knowledge, while we’ve been inundated with mailers from several other candidates.

*Something very interesting jumps out at me from all of this. You’d think that where voters know their Delegate, Senator, Mayor, whatever, you’d expect the voters to like and support that elected official. Yet in Ebbin’s and Herring’s districts, as well as in Mayor Euille’s Alexandria, the elected officials trail badly to Don Beyer. In stark contrast, in Patrick Hope’s district, Hope leads by a wide margin.

*Apparently, as Hope told me in 2009 (I didn’t believe him at the time), when voters get to know him, they come to like him. The question for the next 40 days is whether voters outside Hope’s district will get to know him, like him, and consider voting for him. Right now, most of them don’t really know who Hope is. Of course, it’s quite possible that most voters haven’t focused on this race yet, but will do so in the next few weeks. Stay tuned!

*So, while this isn’t a bad result for Don Beyer, but I’m thinking it increasingly is what they’re most worried about over at Beyer HQ – the potential for Patrick Hope to win big in North Arlington, pick up support in Mt. Vernon and other parts of Fairfax County, and generally emerge as Beyer’s most serious rival. That’s pretty much what I talked about in my scenarios post.