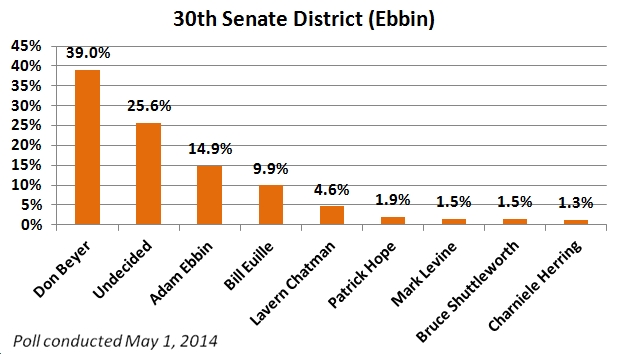 I posted the first installment of our exclusive 8th CD Democratic primary poll a bit earlier today. See here for more details on the poll in general (e.g., it was telephone/automated, with calls conducted by Voice Broadcasting), as well as on results for Charniele Herring’s House of Delegates district specifically. Also see here for details on Alexandria.

Now, we turn to Adam Ebbin’s State Senate District (the 30th), which runs from from South Arlington down the Potomac River through Alexandria and to Mt. Vernon. Ebbin has represented this district since 2012. See the graph and comments (below) for my thoughts. Also note that there were 477 respondents specifically in the 30th State Senate District (out of 1,152 total responses). The margin of sampling error on this section of the poll is +/- 4.1 percentage points.

*First of all, this is a fantastic result for Don Beyer, approaching 40% support in Adam Ebbin’s own State Senate district. Given that Ebbin was widely expected at the start of this race to be Beyer’s most formidable opponent, I’ve got to imagine that it’s all smiles at Beyer HQ after reading these poll results.

*On the flip side, it’s hard to argue that this is a particularly great result for Ebbin, who is polling at just 14.9% – again, in his own State Senate district. Breaking it down further, Ebbin trails Beyer (by 9 points) even in the part of his district where he had been a Delegate from 2003 through 2011. Ouch.

*Ebbin leads Bill Euille in the district by 5 points, with nobody else breaking the 5% threshold, and with four candidates – Hope, Levine, Shuttleworth and Herring – under 2%.

*Depending on turnout, this district could make up 1/4 to 1/3 of the 8th CD Democratic primary vote total, so obviously if you’re not doing well here, you’ll need to make that up in North Arlington and Fairfax County. The question is, can any of the candidates other than Don Beyer do that? I have my doubts.

*The bottom line for Adam Ebbin is that, for him to have a path to victory on June 10th, he’ll need to significantly increase his support in the 30th State Senate district from what this poll shows. For starters, he will need to win over most of the “undecided” voters. He also will need to try and win some of Bill Euille’s voters to his side. That might be tough, though, given that nearly 70% of Euille’s voters say they are “certain” to vote for him, with just 30% or so saying they “could change.”