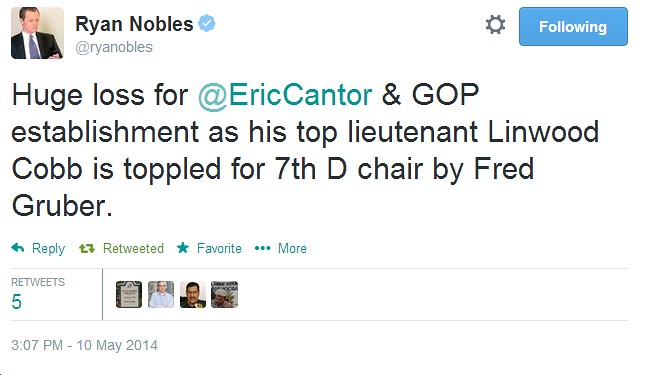 Ruh roh, looks like Eric Can’tor has a little problem in his district. Such a sad, sad, sad shame. 😉 For more, see The Bull Elephant blog, which had reported a bit earlier this afternoon:

IMHO, he shouldn’t get in the mud…makes him look smaller. But kudos to him for engaging in the back and forth. Folks in the crowd yelling out at him. Big boos when he tries to call Brat a liberal.

This speech is going to make the papers.

More popcorn, please! 🙂 In all seriousness, though, it looks like the GOP “establishment” hasn’t gotten the Tea Party completely under control yet, as they’ve been pounding their chests about for months now. Such a shame, huh?

UPDATE: Check it out from Republican blogger Lynn R. Mitchell (she’s referring to Tea Partiers who “came in by the busload Saturday morning to vote at the 7th Congressional District Convention in Richmond”):

When the vote was announced, they cheered. They screamed. They high-fived. They danced around wearing their t-shirts and lapel stickers. They were overheard saying, “They said it couldn’t be done!” They gathered in groupings for photos holding signs.

Hope they are ready to work as hard as Linwood and his 7th Congressional District Committee.

Today, the Democrats’ grins got wider as they watched the continuing implosion of the Republican Party of Virginia. One young black man wearing Cantor stickers, after the vote was announced, turned toward the door and said, “I’m done.”

Wonder how much damage has just been done….

UPDATE #2: Republican Party activist, blogger and former GOP candidate Brian Schoeneman comments, “The lunatics are now running the asylum down in the 7th…The folks down there consider Cantor a liberal. That’s why he got booed…And that’s insane.” It sure is. Eric Can’tor is perhaps not as far right as Attila the Hun or whoever, but he’s close. Let’s just be crystal clear about this: there’s nothing “liberal” about Eric Can’tor. Zilch.

UPDATE #3: The new Republican chair of Rep. Eric Cantor’s 7th district had this to say about Cantor – “Notice I have NOT addressed Mr. Cantor as ‘Representative Cantor’, because I do not feel he properly represents us, in many ways.!” This should be fun to watch.

UPDATE #4: Gruber also had this to say:

I’m sure he’d like the glory of continuing to be district chair and driving that big black SUV that’s parked out front with the VA7GOP license plate on it. Looks like a government Nazi car. Eric Cantor drives one. Secret Service drives them. Big black, you’ve seen it, obviously, in some kind of government film.