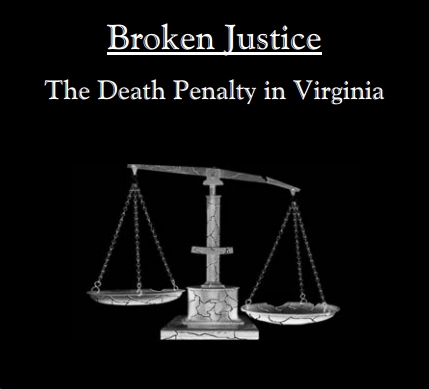 Clearly, Virginia is one of the harshest in the nation when it comes to the death penalty. Just check out the statistics: since 1976, our state is third in the nation, behind execution-happy Texas and not-exactly-the-most-enlightened Oklahoma, in the number of people executed (110). Virginia is also one of just 8 state which use electrocution as one of its execution methods. Also note the racial disparity for people Virginia has executed, with far more African Americans than you’d expect simply based on their share of the population. For instance, the 2003 report, “Broken Justice: The Death Penalty in Virginia”, found (among many other examples of racial bias) that “a black defendant is 3.5 times more likely to receive the death penalty for the rape and murder of a white victim than for the same crimes against a black victim.”

As if that’s not horrendous enough, there’s also the issue of Virginia executing people with extremely low IQs. Which brings us to today’s breaking news.

The Supreme Court gave greater protection Tuesday to death row inmates seeking to prove they should not be executed because they are intellectually disabled, and ruled that laws like those in Florida and Virginia are too rigid.

The court ruled 5 to 4 that state laws that draw a bright line on IQ-test results are unconstitutional. Under those laws, an inmate who scores above 70 on the test cannot be considered intellectually disabled and cannot present evidence that he or she should not be executed.

Florida, Virginia and Kentucky have such laws, and a handful of others have similar rules…

First off, without even analyzing this, you just KNOW that it’s not gonna be good when your state is lumped in with Kentucky and Florida on anything. In this case, it really isn’t good. Here’s what the Supreme Court says about Virginia. Note that “Atkins” refers to the 2002 Supreme Court case Atkins v. Virginia, which held that the “Eighth and Fourteenth Amendments forbid the execution of persons with intellectual disability.”

*”Only the Kentucky and Virginia Legislatures have adopted a fixed score cutoff identical to Florida’s.”

*”In summary, every state legislature to have considered the issue after Atkins-save Virginia’s-and whose law has been interpreted by its courts has taken a position contrary to that of Florida.”

That’s right, Virginia is an outlier on this issue, along with Kentucky and Florida, with every other state legislature post-Atkins having taken a contrary position. Which raises the question, what’s wrong with our legislature? Other than the House of Delegates being dominated by a bunch of right-wing Republicans, that is…