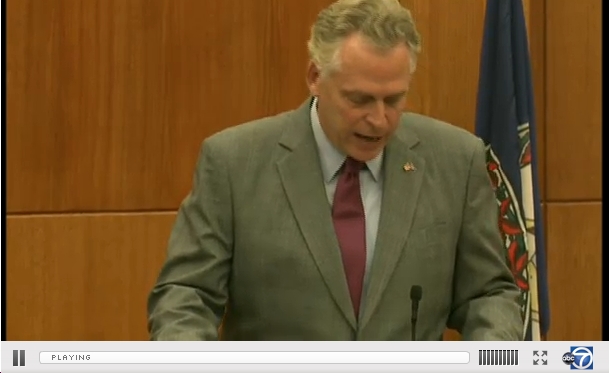 That’s the motto of my campaign. That’s what I believe is the winning strategy for Liberal America to defeat this destructive — evil — force that’s taken over the political right.

And, I’m thinking that what Governor McAuliffe is doing is what that motto looks like, when it’s played out in the budget battles of Virginia.

Glad to have McAuliffe’s kind of pugnacity in the Governor’s chair when the Republicans are making war for this disreputable purpose in this disgraceful way.

We need Democrats who are fighters– and who understand where the opportunities are to defeat this destructive force that’s made the Republican Party so ugly in our times.

I hope that he will fight by picking up the mirror and use this episode to expose the ugliness of what the Republicans have been doing on this expansion of Medicaid issue. Including the perhaps criminal deal for Puckett’s seat.

See the evil– and show it to the people of Virginia. These Republicans have behaved in an ugly fashion, from beginning to end. They are a microcosm of the persistently destructive force that’s taken over the Republican Party.

Governor McAuliffe has the opportunity to expose this part of that ugly picture. It is his best way to fight the battle that’s already at hand, as he has rightly chosen not to surrender. (This is like Obama and the debt ceiling crisis this last time, and we all remember how the Republicans got creamed on that one.)

Governor McAuliffe has stood his ground, and now we must encourage him to press the battle.

I’d say to him: Offense, not defense. Don’t expend great energy on defending yourself against their charges. Brush those quickly aside as nonsense and hypocrisy and pour your energy into an attack on what it is that they have shown themselves to be.

That truth is their greatest vulnerability.

It is only by fraud that these “conservative” and “Christian” Republicans get the credibility they need to wreak their damage on our society.

See the evil. Call it out. Press the battle. Take their power from them.