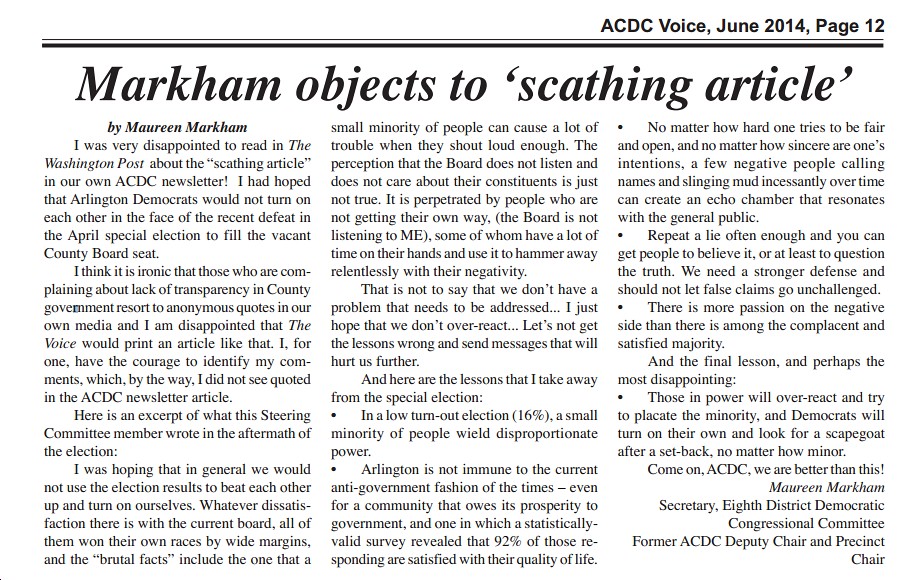 First off, in a low-turnout special election like the April 8 contest for Arlington County Board between Alan Howze (D) and John Vihstadt (“R” pretending to be an “I”), it is almost inevitably going to be the, loudest, angriest people who show up, which means that those folks “wield disproportionate power” over the “complacent and satisfied majority” (reminds me of the expression, “evil flourishes when good people do nothing”).

Second, I agree with Maureen that despite being an overwhelmingly Democratic and liberal place, where 92% of residents are satisfied with their quality of life, Arlington is “not immune to the current anti-government fashion of the times.”

Third, I agree that if you “repeat a lie often enough…you can get people to believe it.” In this case, it was a relentless campaign of distortions and falsehoods about a bunch of things, first and foremost the Columbia Pike streetcar project and the supposed alternative of “Bus Rapid Transit” (BRT). I say “supposed alternative” because, of course, BRT is not possible without a dedicated lane, which is not possible on Columbia Pike. So much for that idea.

As for the cost/benefit calculus on the streetcar project, this study made it clear that the streetcar “would spur $3.2 billion to $4.4 billion in development over the next 30 years in Arlington and Fairfax counties, triple the amount that would be triggered by improving bus transit.” Of course, you’ll never hear that from John Vihstadt or his supporters, who prefer to rant and rave about what a supposed boondoggle this project is.

Having said all that, I DO think there are legitimate questions with a variety of projects in Arlington County in recent years with regard to cost, and those should be seriously addressed. For instance, following criticism, however “over the top,” of the infamous “million-dollar bus stops,” the County Board addressed the issue and slashed the costs significantly, to where they are now comparable in price or actually LESS expensive than similar transit stops in other cities around the country.

With regard to the Long Branch aquatic center project, criticism and concern about the cost has put that project into limbo, with County officials looking at “downsizing, delaying or discarding plans for the facility.”

So, sure, it’s not like the Arlington County government hasn’t made mistakes (and been called out, LOUDLY, for doing so!). But that doesn’t mean Arlington County isn’t one of the best places to live in the world. Nor does it mean that these problems rise to the level of concern that the Vihstadt folks claimed/pretended they did. Sorry, but an aquatic center running over budget doesn’t quite rank up there with sequestration, Arlington’s economic challenges at a time of federal and state government austerity, the need to slash our greenhouse gas emissions, etc., etc. It just doesn’t.

Last but not least, I don’t fully agree with Maureen that the perception of the County Board not listening as well as they should, being “arrogant, insular and noncommunicative” as the Vihstadt supporters’ refrain went this past spring, is completely imaginary by any means. For instance, how many of these folks use social media to communicate with people, given that the vast majority of Arlington County voters are on Facebook, Twitter, etc? How many of these folks don’t respond to emails, phone calls, etc.? How many of these folks, when they DO respond to questions, sometimes do so in a condescending, arrogant fashion (I experienced it myself, back in April)? Too many, that’s all I’ll say on that subject.

Of course, none of this represented ANY REASON AT ALL not to vote for Alan Howze, who last I checked is not a member, present or past, of the Arlington County Board. So tarring him with the “arrogant/insular/non-communicative” criticism is not accurate or fair. In fact, Howze would be part of the solution, not part of the problem. And, frankly, it’s time for Howze’s supporters to step up their game in communicating that concept, or we could well see Republican John Vihstadt win in November, just as he did in April, even in spite of the big increase in Democratic voters expected at the polls to vote for Mark Warner and the 8th CD Democratic Congressional nominee. That would be a really bad move for the future of what has, heretofore, been one of the best places to live in the country.