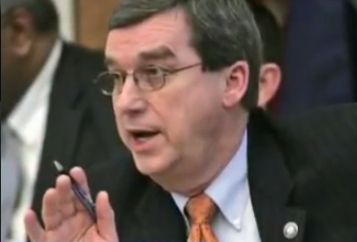 What if we’ve been looking at the Phil Puckett scandal backwards?

From the moment that Virginia State Senator Phil Puckett resigned on June 9, 2014, many commentators–myself among them–have raised the question of whether the GOP leadership in Virginia’s General Assembly conspired to bribe Puckett with a judgeship for his daughter and a job for Puckett at the Tobacco Commission with a six-figure salary.

If that is how we understand the transaction between Puckett and the General Assembly Republicans, then we face a hurdle in prosecuting them: was Puckett’s resignation an “official act”? In “Va. officials skeptical of U.S. interest in Phillip Puckett’s resignation from state Senate” by Laura Vozzella, Matt Zapotosky, and Jenna Portnoy, these three Washington Post writers describe the obstacle prosecutors face in looking for an “official act.”

Even so, legal experts said building a public corruption case against Puckett or Kilgore could be an uphill climb.

In 2010, the Supreme Court decided that the government could not prosecute legislators or government officials for what is known as “honest services fraud” simply because they participated in a self-dealing, conflict-of-interest arrangement.

The question for Puckett and Kilgore and those investigating the arrangement, experts said, is this: Is resigning one’s office an “official act”?

“It’s a stretch, because I think it’s more of an abdication than an act,” said Andrew T. Wise, a defense lawyer at Miller & Chevalier who represented a lobbyist connected to Jack Abramoff. “I would hate to be the line prosecutor trying to sell this to my supervisor.”

You can read the rest of “Va. officials skeptical of U.S. interest in Phillip Puckett’s resignation from state Senate” at The Washington Post.

But what if we’ve been looking at the transaction between Puckett and the General Assembly Republicans completely backwards?  What if Puckett’s resignation was the bribe and Puckett’s daughter’s judgeship and Puckett’s Tobacco Commission job offer were the “official acts”?

Seen in this light, Puckett was the briber, not the “bribee.” The General Assembly Republicans didn’t try to bribe Puckett, instead they accepted a bribe from Puckett in exchange for the official acts of getting Puckett’s daughter a judicial appointment and giving him a well-paid job at the Tobacco Commission, both of which are emphatically “official acts.”

It makes little difference in terms of the penalties involved: accepting a bribe is just as illegal as offering a bribe.  The difference it makes is in prosecuting the case.  If Phil Puckett is cast in the role of briber and Terry Kilgore and the other Republican legislators involved are then shown to have provided “official acts” in exchange for Puckett’s bribe, then the prosecution is much more likely to prevail.

Cross-posted from The Richmonder.

This says it all about VA GOP chair Rich Anderson...seditionist Ben Cline leaps to his defense after his racist "literal ghetto" comments https://bluevirginia.us/2021/01/tuesday-news-senate-power-sharing-deal-moves-ahead-biden-sets-sights-on-1-5-million-vaccinations-a-day-schumer-calls-for-biden-to-declare-climate-emergency-businessman-pete-snyder-jo#comment-5242449399