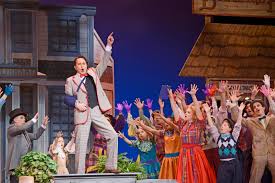 On Tuesday, July 22, Glenn Beck spoke from some 700 movie screens to Americans who paid admission to hear him attack the “Common Core.” The “Common Core” consists of standards, offered to the states, defining the knowledge and skills that American school-children should learn at each stage of their education.

Beck’s move here reminded me of “The Music Man,” the con man in the musical of that name who comes to an Iowa town to fleece the good people there. What Beck and the con artist in “The Music Man” have in common is that to accomplish their own hidden aims they tap into the anxieties that parents have regarding their children.

What the Music Man was selling were fictitious musical instruments and band uniforms, and he did it by playing on parental fears of corrupting influences on their children (fears aroused by the arrival in town of a Pool Hall, which starts with ‘P’ which rhymes with ‘T’ which stands for ‘trouble’).

Beck’s pitch against the Common Core is selling a different fear: that the federal government is seeking to take control of their children away from their parents for purposes of indoctrination.

I do not know enough to judge whether or not the Common Core would improve our national educational performance. (Despite being the son of teachers, and having myself taught at both college and high school levels, I do not claim to know what is required to greatly improve the education of America’s children.) But I do know enough to feel sure that there is nothing nefarious about the proposed national standards. The Common Core seems to be a good-faith effort — wise or not — to address a genuine national problem of educational attainment that lags behind that of many other advanced democracies.

But I suspect Beck’s campaign is not really about the Common Core, or about the education of our children, any more than the Music Man was offended by a pool table. I suspect there’s another reason altogether why he’s working on American parents with this particular paranoid pitch.

The pay-off for the Music Man was that he’d pocket the money the parents paid and then skip town, richer at their expense. Beck’s con, I suspect, is similar, but its purpose is vaster and far more dangerous. Glenn Beck is just the front man, while the real source of the con seems to be the whole system of what might be called “Koch Brothers Capitalism.”

Beck is the pitchman on the screen, but one of the main sponsors of the event is FreedomWorks, a political organization funded by the Koch brothers. The pitch is about the children, but if there’s any reason to believe that FreedomWorks cares a whit about the future of the children of the parents who attended these events, I am unaware of it.

So what makes this venture worthwhile to the organization whose main concern seems to be to allow capitalism to operate unfettered? How does an attack on the Common Core serve the purpose of a political group whose priority is to prevent the federal government from making sure that our economic system functions in ways consistent with the public good?

Here’s where I believe I see a diabolical kind of cleverness.

The reason American parents are worried about their children is that they sense that their children’s prospects are eroding. Evidence mounts that today’s youth is the first generation of Americans to have a tougher road to the American Dream than their parents. The middle class is eroding, better jobs are being replaced by worse jobs (and many young people have been unable to get any jobs at all), higher education is becoming less affordable for average families, median family income has been dropping for years.

In all these developments, the power of the corporate system is implicated. That system, for example, has advanced a kind of globalization – through trade deals — in which American capital thrives while American workers get the shaft. That power also has succeeded in shifting taxation away from corporations and from the rich and while also shifting spending away from programs that foster equality of opportunity.

The plutocratic power of the corporate system is transforming a middle class society into one where productivity gains no longer benefit the people who do the work, where the many toil to enrich the dominant few and the system that they run.

Now here comes Glenn Beck, with his undoubted skills at the rhetoric of propaganda, to misdirect the fears and anger of frightened parents. “It’s not the corporate system and the plutocracy that  it’s creating that threatens to hurt your children,” the man on the screen is implicitly saying. “It’s the federal government.”

But this misdirection is only half the payoff for this corporatist power. Not only does this message point these parents away from the real source of the problem, but directs their fear and suspicion against the one power that might provide a solution to the problem. For in our society, it is only the federal government that has the potential power to check the growing dominance of the corporate system.

For the federal government to do that, however, it would have to be the instrument of the people’s will, as it was designed to be. But that will only happen if the people rise up to make it so.

And that’s the big pay-off for the corporatists behind all this: while the figure of Glenn Beck on the screen is getting these Americans worked up about protecting their children against a reasonable and well-intentioned effort to improve the education of our children, he is serving the corporate system by feeding perception of the federal government, by now so well cultivated in the right-wing base, not as the people’s potential tool, but as their enemy.

The goal of the Music Man was just to fleece his marks and skip town. Today’s corporatist con men would rob us of much more. Their goal is to own and run the town.