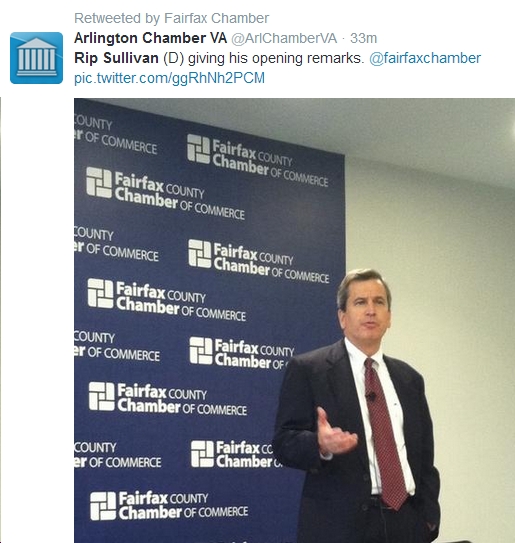 The Fairfax Chamber of Commerce’s 48th House of Delegates debate is happening right now. I’m not there but will pass along what I see on social media. Why on earth there’s no live feed for this is beyond me.

UPDATE 9:14 am: @Lopez4VA tweets, “Great debate!!  Please vote on Aug 19th!!” Sounds like Dave Foster revealed himself to be a standard-issue right winger on economic and energy issues, while Rip Sullivan strongly reflects the views of the vast majority of 48th House of Delegates district voters. This choice is an absolute no brainer. Go Rip!

UPDATE 9:13 am: @Lopez4VA tweets, “@RipSullivan48 I’d work across the aisle to make VA a leader again on the environment and renewable energy.” Bingo!

UPDATE 9:11 am: @Lopez4VA tweets, “@RipSullivan48 if Foster had his way we’d have a Gov Cuccinelli and AG Obenshain – we’d be a very diff state.” So, so true. Thank goodness Foster did NOT have his way!

UPDATE 9:00 am: @Lopez4VA tweets, “RPS – RipSullivan48 we need to move towards stronger standards. Foster-no we need to be business friendly-and not get ahead of other states.” Wow, Foster is wildly wrong on this one!

UPDATE 8:56 am: @Lopez4VA tweets, “@RipSullivan48 knocks it out of the park on renewable energy – and ways that VA can develop businesses and create jobs…Foster supports all of the above on energy – offers that this includes off shore drilling.” Go Rip! Foster #FAIL! 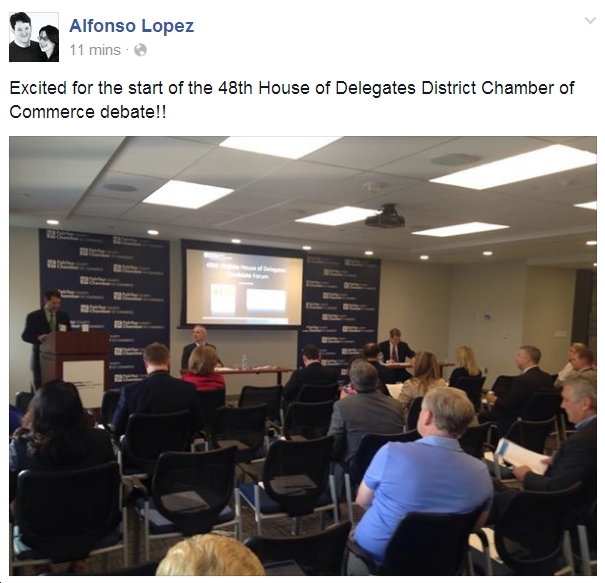 UPDATE 8:44 am: @Lopez4VA tweets, “Foster agrees-says that he is better positioned work with majority R’s on issues.Idea that he can temper tea party element met w/eye rolling.” Hahahahaha. #FAIL

UPDATE 8:40 am: @Lopez4VA tweets, “Widening of 66 – @RipSullivan48 – detailed, nuanced response about history of R intransigence on traffic funding over the years…@RipSullivan48 Happy about work outside beltway – but need to keep current footprint inside beltway re. 66.”

UPDATE 8:35 am: ‏@Lopez4VA  tweets, “Foster – Medicaid expansion – fed dollars may not be there forever – so we shouldn’t plunge in without reforms as well. R talking points 101.” Huge #FAIL on that one.

UPDATE 8:31 am: Also from Alfonso Lopez – “1st question is on ppp’s – foster talks about street car. @RipSullivan48 focuses on fact that election is about much more than streetcar…@RipSullivan48 ‘you’d think that was the only important issue according to my opponent…'”

UPDATE 8:29 am: Alfonso Lopez tweets, “@RipSullivan48 opening – best person running to build on what Govs Warner and Kaine did to make VA the best state for business in the US.”

Excellent idea by Rep. @GerryConnolly (D-VA11)! ("I call on the George Mason University Board of Visitors to rename the Law School the Scalia-Ginsburg School of Law")
https://bluevirginia.us/2020/09/monday-news-tax-story-shows-trump-a-pitifully-inept-businessman-and-a-serial-tax-avoider-crushed-by-massive-debts-joe-biden-would-restore-decency-honor-and-competence-to-americas-gov#comment-5088992432