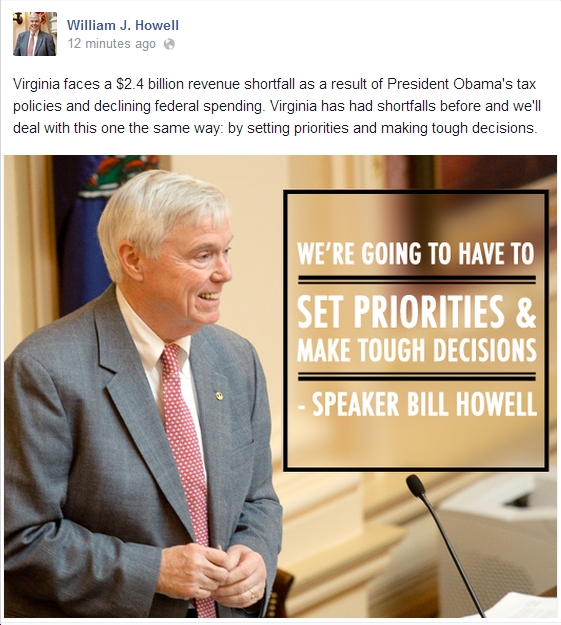 So, let’s get this straight. According to conservative Republican Virginia House Speaker Bill Howell, Virginia’s fiscal problems are the result of repeated tax cuts. Seriously, check out his Facebook post below, which claims that Virginia’s $2.4 billion revenue shortfall is the result of: a) “Obama’s tax policies” (e.g., extending most of the Bush tax cuts, repeatedly CUTTING taxes for the overwhelming majority of Americans (even right-leaning PolitiFact says that Obama has “pursued broad-based tax cuts for the middle class and small businesses”); and b) “declining federal spending” (which is party overwhelmingly supports).

Meanwhile, Howell refuses to take around $3.5-$4.5 million a DAY in federal funding that comes with expanding Medicaid in Virginia. He also supported cutting Virginia’s estate tax, which has cost us around $140 million a year for the past 8 years or so, for a loss to the budget (in order to benefit a few hundred super-rich families) of around $1 billion (and counting).

Instead, you know what Howell means by his Orwellian Newspeak garbage about “setting priorities and making tough decisions”: slashing funding for those who need it most, for education, for transportation, for environmental protection, you name it, all while continuing to coddle wealthy and powerful Virginia individuals and (of course) the corporations that have bought and paid for Howell et al’s loyal service.

P.S. Of course, it always makes me smile to see a supposed conservative Republican repudiate his party’s “supply side” (aka “voodoo economics”) mantra that tax cuts don’t lead to deficits (because they supposedly stimulate SO much economic activity that it more than makes up from the lost revenues due to lower rates). I wonder if Howell even realizes he just did that.