I have claimed that America now faces one of the most profound crises in its history, but unlike with the other major crises, this time our national conversation has not focused on discussing what’s gone wrong and how it might be set right.

If I’m right, what does that say about the performance of the press? 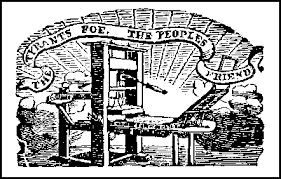 Our founders instituted special protections for the press not because they had a love for journalists, but because they recognized that a free press is necessary for the maintenance of a free society.

I have claimed that a force more destructive and dishonest than anything before seen at center stage of American politics has taken over one of our major political parties and is wreaking great damage on American civilization.

If alerting the American people to such a portentous development is not precisely what our founders had in mind, when they enshrined protections for a free press into the Constitution to protect the democratic system they had set up, what would be?

I had an opportunity to experience this “abdication of the press” first hand, in 2011-12, when I ran for Congress as one of the two major-party nominees in the District in Virginia where I live.

My campaign motto was “Truth. For a change.” And I explained why I had jumped into the political arena, despite being too straight-forward for politics under ordinary circumstances, saying: “Nowadays, the lie so often defeats the truth that I figure this is a time when truth-telling needs its champions.”

My opponent was the 20-year Republican incumbent Bob Goodlatte (now the chairman of the House Judiciary Committee), and I spent much of the campaign calling him out on the many falsehoods in his communications to the electorate. Not that Mr. Goodlatte was a special case of lying. He was just continually spouting the Republican Party line which, in our times, is almost habitually dishonest even by the standards of the usual politics.

Here’s where the press let me down. Or rather where they let down their readers and viewers, as well as the noble standards of good journalism.

One might say, in the press’s defense, that it would not be reasonable to expect small-market media, such as we have in my District, to separate truth from falsehood on the issues that arise in our politics.

But how much less reasonable is it to expect that the citizens – who spend only a few minutes a day, on average, keeping track of the news – will be able to make such a determination. Is it not the job of the press to help their readers to understand the truth about the matters before them as citizens?

Not long ago, a New York Times ombudsman felt it necessary to ask his readers if it were the responsibility of journalists to tell their readers when some statement from a public person was downright false. What does it mean that such a question should need to be asked?

With a press that regards itself as having fulfilled its responsibilities when it treats the truth and the lie even-handedly, is it any wonder that we are in an era where the lie so often defeats the truth?

In any event, in my race victory went to the veteran politician who knows how to present a false picture in a bland way with a straight face, secure in the knowledge that the press will not expose him.

My little vignette is a tiny corner in a vast tableau of a political landscape insufficiently reported by most of the American press.

Consider: The great majority of the American people feel that the nation is heading in the “wrong direction,” and this striking and worrisome popular judgment has persisted almost uninterruptedly for some years now.  Is it not as clear an indication as could be that something of great importance has gone wrong in the nation, when most of the people feel their country has lost its way?

And when the nation has a deep problem — as this one surely is ==  is it not the job of the press to get to the bottom of the matter? Would not a responsible press be asking: what is it that makes people feel that things are heading wrong, and what is responsible for the direction things are going?

Obvious questions. Questions that should be getting the full journalistic investigatory treatment – like an oil spill in the Gulf, like the crash of an airliner, even like a stain on a blue dress, only much more so, since this is so fundamental. But where in the American press are these obvious lines of inquiry being pursued?

And consider: It’s almost universally recognized that the American political system has become dysfunctional. The Congress, held in historically low esteem, is making the “do-nothing Congress” Truman ran against look like a hive of productive activity.

Clearly, it’s a major national problem when the instruments our founders gave us for meeting our national challenges are failing to work. And is it not the job of the press to help the citizenry understand what it is that’s gone wrong: Whose fault it it that our politics are so messed up? Is one side or the other acting in an unprecedented manner to produce this unprecedented dysfunctionality?

Obvious questions. Important questions, the very kind a responsible press in a democracy would tackle. And questions unasked.

Why has the press abdicated its important responsibilities?

The Republican Party has become the instrument of a destructive force, while the response of Liberal America (including the Democratic Party) to this threat has been woefully weak.”

Is the failure of the press, for example, a sign that this increasingly corporate “infotainment” industry is in cahoots with the set of forces that have taken over the right.

Or is its failure to confront the lie a sign of the press being intimidated, and/or blind, in ways like those that have fostered the weakness in Liberal America?

Or perhaps some of each.

Whatever the reason, it becomes increasingly clear that the disease – though it manifests in different ways in different components of America – pervades all the major organs of the American body politic.