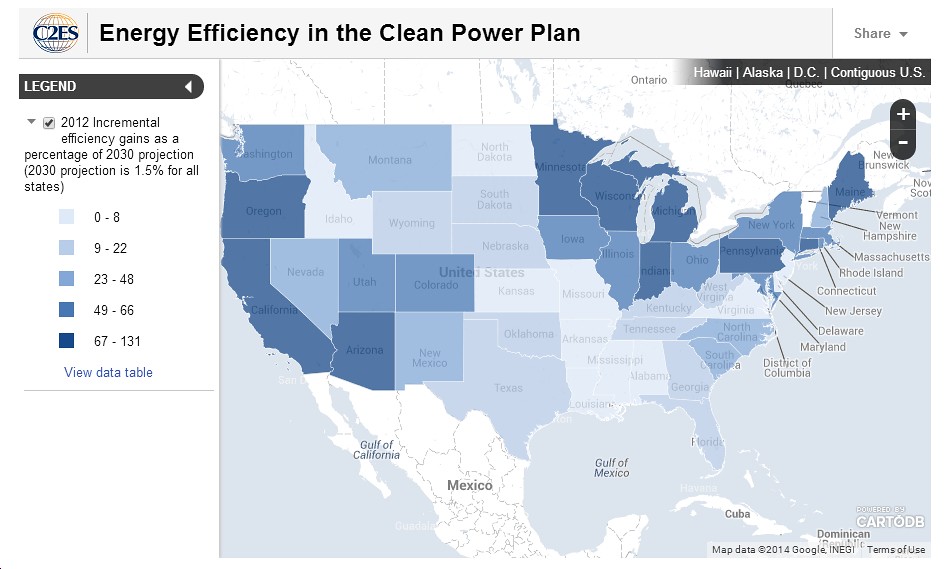 Cross-posted from Scaling Green; Blue Virginia readers should particularly focus on how pathetically far behind Virginia is when it comes to energy efficiency improvements. For that, we can thank our old pals at Dominion “Global Warming Starts Here” Power, which continues to resist any serious attempts at cleaning up its dirty act. #FAIL as usual for those guys, as well as for the General Assembly that lets them pollute at will.

The release in late May of EPA’s draft rules on carbon pollution at existing power plants gave individual states a tremendous amount of flexibility in how they meet the proposed targets.  For instance, a state rich in potential solar power resources might choose to focus on increasing the percentage of its electricity generated from the sun.  Same thing with wind power.  And, of course, all states can use energy efficiency gains as a key part of their plans. As the Center for Climate and Energy Solutions explains:

Through energy efficiency programs, states can drive down their total consumption, including consumption of electricity generated by fossil fuels. This in turn reduces greenhouse gas emissions, bringing states closer to their emission rate target. EPA projects that each state is capable of eventually reducing electricity demand by 1.5 percent each year, in line with the rate leading states have achieved. States are projected to meet this figure in varying years, taking into account how advanced each state was in 2012. This 1.5 percent projection is incremental, meaning EPA expects an additional 1.5 percent savings each year, for a much larger cumulative savings by 2030. Projections for states that currently reduce demand by less than 1.5 percent per year are designed in a way that allow a ramp-up period before reaching this level, but EPA has determined that all states have the capacity to meet this projection by 2025 at the latest. Note that under the proposal, states are not obligated to meet EPA’s efficiency projections in demonstrating compliance; provided the ultimate target emission rate is met, states could use any combination of measures they see fit.

The map above shows each state’s 2012 incremental efficiency savings as a percentage of the 1.5 percent projection. States colored with a darker shade of blue are closer to meeting this projection. Two states, Arizona and Maine, reported savings above 1.5 percent in 2012.

As we know, energy efficiency is generally considered to be the biggest “bang for the buck” when it comes to reducing energy consumption and carbon pollution, which means that this EPA goal makes a great deal of sense.  Yet, according to the Center for Climate and Energy Solutions, only 21 states have mandatory Energy Efficiency Resource Standards, while 17 states have no energy efficiency standards at all.  That’s unfortunate, particularly given that Rocky Mountain Institute Chairman and Chief Scientist Amory Lovins has found that“adopting efficiency technologies aggressively yet cost-effectively, yield[s] at least a 12% annual real rate of return.” As states formulate their plans aimed at meeting their EPA CO2 pollution reduction goals, it seems like pushing ahead on energy efficiency improvements should constitute an easy, “no brainer” option.