Yes, this is appalling even by Ken Cuccinelli standards. First off, he links to a climate science “skeptic” website. Then, he channels Rand Paul’s insane criticism of Hillary Clinton that she can’t say that BOTH global warming AND terrorism are threats to the world (and that global warming poses by FAR the greatest threat to the future of mankind, 1000s of other species, the oceans, life on earth in other words). Then, he posts this disgusting, repulsive “cartoon” mocking Hillary Clinton for stating the obvious, also what 97% (or more) of climate scientists are saying: climate change is an urgent threat that we need to deal with. And just remember, this lunatic was elected Attorney General of Virginia in 2009, then spent four years waging war against climate science (and climate scientists like Michael Mann), then came within a few points of being elected GOVERNOR of Virginia! All of which raises an even more disturbing point: there are millions of Virginians (and Americans) willing to vote for people like this. That’s even more disturbing in its own way than this cartoon, and the fact that Cuccinelli chose to tout it on his Facebook page. Shudddderrrrr…. 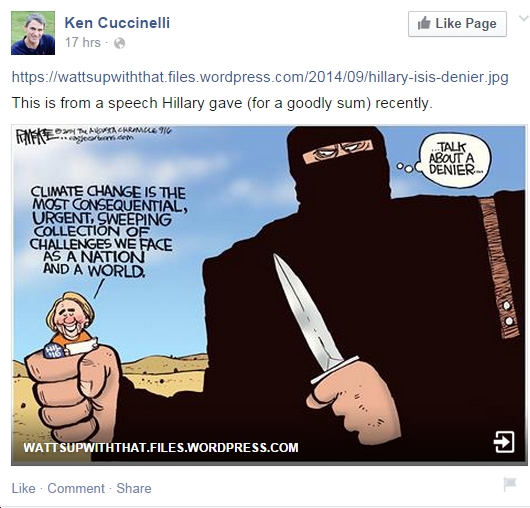