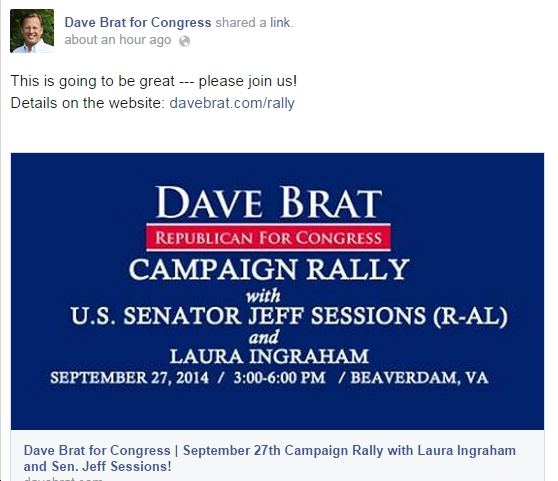 Yes, Dave Brat is all excited to be rallying with this guy.

In 1986, Reagan nominated Sessions to be a judge of the U.S. District Court for the Southern District of Alabama. Sessions’s judicial nomination was recommended and actively backed by Republican Alabama Senator Jeremiah Denton. A substantial majority of the American Bar Association Standing Committee on the Federal Judiciary, which rates nominees to the federal bench, rated Sessions “qualified,” with a minority voting that Sessions was “not qualified.”

At Sessions’ confirmation hearings before the Senate Judiciary Committee, four Department of Justice lawyers who had worked with Sessions testified that he had made several racist statements. One of those lawyers, J. Gerald Hebert, testified that Sessions had referred to the National Association for the Advancement of Colored People (NAACP) and the American Civil Liberties Union (ACLU) as “un-American” and “Communist-inspired” because they “forced civil rights down the throats of people.”

Thomas Figures, a black Assistant U.S. Attorney, testified that Sessions said he thought the Klan was “OK until I found out they smoked pot.” Sessions later said that the comment was not serious, but apologized for it.[10] Figures also testified that on one occasion, when the U.S. Department of Justice Civil Rights Division sent the office instructions to investigate a case that Sessions had tried to close, Figures and Sessions “had a very spirited discussion regarding how the Hodge case should then be handled; in the course of that argument, Mr. Sessions threw the file on a table, and remarked, ‘I wish I could decline on all of them,'” by which Figures said Sessions meant civil rights cases generally. After becoming Ranking Member of the Judiciary Committee, Sessions was asked in an interview about his civil rights record as a U.S Attorney. He denied that he had not sufficiently pursued civil rights cases, saying that “when I was [a U.S. Attorney], I signed 10 pleadings attacking segregation or the remnants of segregation, where we as part of the Department of Justice, we sought desegregation remedies.”

Figures also said that Sessions had called him “boy.” He also testified that “Mr. Sessions admonished me to ‘be careful what you say to white folks.'”

Sessions responded to the testimony by denying the allegations, saying his remarks were taken out of context or meant in jest, and also stating that groups could be considered un-American when “they involve themselves in un-American positions” in foreign policy. Sessions said during testimony that he considered the Klan to be “a force for hatred and bigotry.” In regards to the marijuana quote, Sessions said the comment was a joke but apologized.

In response to a question from Joe Biden on whether he had called the NAACP and other civil rights organizations “un-American”, Sessions replied “I’m often loose with my tongue. I may have said something about the NAACP being un-American or Communist, but I meant no harm by it.“[8]

By the way, as if Sessions’ racism isn’t bad enough, how about his voting against the  against the Matthew Shepard Act as well as against “congressional resolution calling on members of the Ugandan Parliament to reject the proposed ‘Kill-the-Gays Bill?'” How about his opposition to embryonic stem cell research? How about his vote against a Senate amendment “that prohibited cruel, inhumane, or degrading treatment or punishment of individuals in the custody or under the physical control of the United States Government?” Can you see why a right-wing nutjob like Dave Brat would be so excited to rally with this guy? My god…