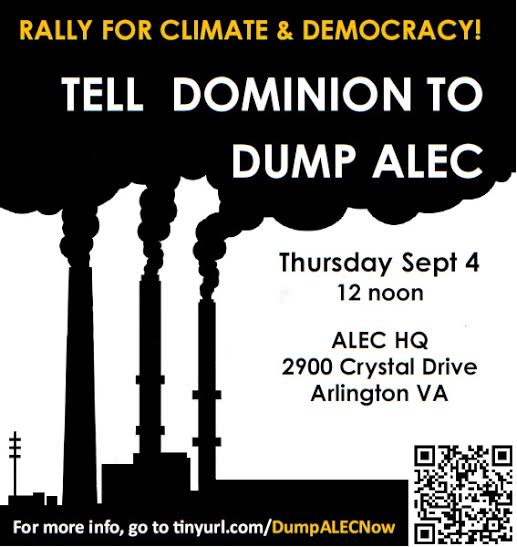 Recent William & Mary grad Priscilla Lin, wrote this piece. Priscilla is concerned about climate change and in particular ocean issues. She volunteers with Oceana, which is a co-sponsor of the Sept. 4 Dominion-Dump-ALEC rally in Arlington County.

It’s time for Virginians to call on Dominion Resources, Inc. to leave the American Legislative Exchange Council (ALEC). Join me for a Dominion-Dump-ALEC rally at ALEC Headquarters in the Crystal City area of Arlington County on September 4 at noon.

As a native Virginian and 2014 college graduate interested in protecting the  environment, it comes as no surprise to me that Dominion Virginia Power, Virginia’s largest electric utility, is dirty. Dirty fossil fuel energy, which contributes to climate change and ocean acidification, is not the way towards a better, cleaner future. I learned recently that Dominion belongs to ALEC, an organization with a pro-polluter agenda. Dominion publicly touts its supposed environmental awareness, but it doesn’t explain what it does behind closed doors with the shady anti-climate and anti-democracy group ALEC.

You won’t find any mention on Dominion’s website or in its public pronouncements of its work to undermine environmental protections through its participation in ALEC, which has been described as “a corporate bill mill.” It brings together corporations and state legislators and comes up with “model legislation” for the legislators to introduce back home.

ALEC has consistently pushed anti-climate and anti-environment legislation. Dominion’s association with the group directly conflicts with its claims to support clean energy. You can learn more about ALEC at alecexposed.org.

A recent report by the Toronto Star reveals ALEC’s “plans to undo environmental legislation” with its own model bills, referring to leaked internal documents from ALEC’s recent summer meeting in Dallas. Among the leaked internal ALEC documents were  slides from a conference presentation denouncing the Intergovernmental Panel on Climate Change (IPCC) and promoting ways to “rein in EPA” by impeding renewable energy development, opposing carbon pricing, “lifting obstacles to conventional energy,” and more. You can access the slides, posted online by the nonprofit watchdog group Center for Media and Democracy (CMD).  That ALEC presentation showcases 19 ALEC model bills that specifically target the group’s goals. The presentation was given by Joseph Bast, president of the Heartland Institute-an extreme group notorious for its support of climate-science denial (even comparing those who “still believe” in climate science to mass murderers).

ALEC also has supported voter suppression and pushed for controversial stand-your-ground gun laws. This has led to more than 80 corporations to date, including Walmart, Coca-Cola, and (most recently Microsoft) to cut ties with ALEC.

Why on earth is Dominion helping to fund ALEC? It’s time for Dominion to make a real commitment to addressing climate disruption. The company should stop fighting clean-energy measures and work with a sense of urgency to develop Virginia’s carbon-free energy potential. An important first step is to leave ALEC.

Beginning at noon on Thursday, participants will march with signs alongside busy U.S. Route 1/Jefferson Davis Highway (between 27th St. and Crystal Drive). Speakers, including Alexandria Mayor Bill Euille, will address the group.

For more information, go to tinyurl.com/DumpALECNow.