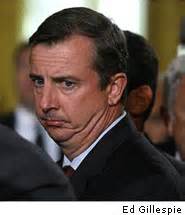 From the Wason Center for Public Policy at Christopher Newport University:

Likely voters favor Warner by 53 percent, compared with 31 percent for Gillespie, according to the survey. Libertarian candidate Robert Sarvis holds a 5% share of the overall vote, with 11% undecided.

Warner has stronger support among Democrats (91%) than Gillespie has among Republicans (80%), and outpolls Gillespie among Independents (48% to 23%).  Warner is favored by ideological moderates (60% to 21%) and has a significant share of ideological conservatives (19% to 67%). A majority of both men (51%) and women (55%) favor Warner.

“Mark Warner’s position surely makes him the envy of all of those incumbent Democrats who are in trouble across the country,” said Dr. Quentin Kidd, director of the Wason Center for Public Policy. “Warner not only has the solid backing of his own partisans, but also significant support among Republicans and ideological moderates and conservatives — what might best be called ‘Warner conservatives.’”

In other elements of the survey, Gov. Terry McAuliffe shows a 47% to 27% approval rating. A majority (53% to 43%) disapprove of the job President Obama is doing. And Congress stands in record low territory among Virginia voters, with 85% disapproval and 12% approval.

The Warner-Gillespie numbers have changed little since the Wason Center’s January 2014 survey, when voters said they favored Warner over Gillespie, 50% to 30%. Gillespie was then the front-runner for the Republican nomination, which he won in June. The election is Nov. 4.

“Ed Gillespie’s challenge is formidable,” Kidd said. “He has to build his base while at the same time chipping at Warner’s solid lead.”