Cross posted with permission from the Checks and Balances Project

Earlier this year, the Virginia legislature passed a bill that requires the McAuliffe Administration to evaluate the costs and benefits to the state of complying with the U.S. Environmental Protection Agency’s Clean Power Plan. That plan would require Virginia to reduce carbon emissions by 37.5% by 2030 from 2012 levels. Carbon pollution from such sources as coal-burning power plants are fueling climate change and resulting sea level rise in areas such as southeastern Virginia.

Professor Karmis is a curious choice. He is considered the state’s leading academic expert in coal, with an international reputation. He is the director of Virginia Tech’s Virginia Center for Coal and Energy Research, and founder of the Appalachian Research Initiative for the Environment Sciences, whose partners include leading lights of the coal industry: Alpha Natural Resources, Arch Coal, Cliffs Natural Resources, MEPCO, Natural Resource Partners, Patriot Coal Corporation, and TECO. Karmis is also a director of The Alpha Foundation for the Improvement of Mine Safety and Health, Inc. based in Bristol, Virginia. He is an active consultant to the mining industry. Karmis is the go-to man if you want to know just about anything related to coal in the Commonwealth.

But is Michael Karmis the man to conduct an impartial analysis of the costs and benefits of complying with the EPA plan? Especially considering that the EPA plan calls for sharply reducing carbon pollution from existing coal-fired plants that generate electricity? Were other less invested in the fossil fuel industry even considered?

Does Karmis have a conflict of interest?

To learn more about Professor Karmis’ contract to produce the analysis, I filed, on behalf of the Checks and Balances Project, a Virginia Freedom of Information Act (FOIA) request with DMME. I requested copies of any and all records, including meetings, emails, and phone logs, related to the contract and a host of Virginia officials.

With sea levels rising faster in southeast Virginia than in any other area along the East Coast, Virginia deserves an unbiasded look at the costs and even greater benefits of meeting the EPA’s standards. Unfortunately, an independent assessment from someone who makes his living as a “clean coal” expert is unlikely.

Hopefully, the FOIA I filed yesterday will shed some light. 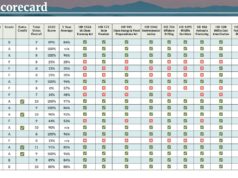 .@Vangie4Congress: “I drove through Manassas…If you want to know what an angry black woman sounds like, this is it.” https://bluevirginia.us/2020/05/vangie-williams-i-drove-through-manassas-if-you-want-to-know-what-an-angry-black-woman-sounds-like-this-is-it via @bluevirginia