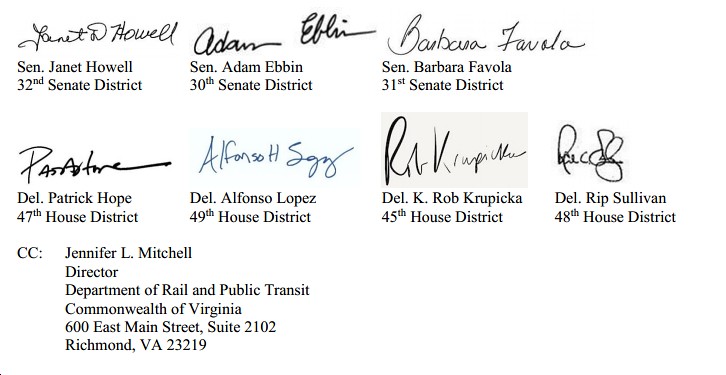 Impressive that the entire Arlington General Assembly has signed onto this letter. Also, see the parts I’ve bolded for a few key points. Go streetcar!

P.S. Del Alfonso Lopez totally nails it in his ArlNow column, which utterly demolishes the absurd “Garvey-Vihstadt plan.” Great to see them being called out.

As Members of the Arlington County General Assembly delegation, we strongly support the Commonwealth of Virginia’s commitment to provide funding for the regional streetcar system that the Commonwealth Transportation Board (CTB) has included in its six year improvement program.

We are particularly pleased to see that Jennifer Mitchell, Director of the Virginia Department of Rail and Public Transportation, confirmed in response to a press inquiry that the Commonwealth remains fully committed to providing Arlington and Fairfax Counties with $65 million over the course of the six-year improvement program in addition to other state funding.

We concur with Director Mitchell that this “project is an important regional priority and a key part of the economic redevelopment along Columbia Pike and the Pentagon City and Crystal City corridors.” We strongly disagree with the efforts of Libby Garvey and John Vihstadt to deprive Arlington of those state funds dedicated to the streetcar project. In testimony before the CTB, Libby Garvey noted that although she and John Vihstadt are Arlington County Board members, she was speaking in her individual capacity and on behalf of Mr. Vihstadt in his individual capacity.

The reason for that distinction is that it is official County policy to support the planning, development, construction and operation of the streetcar system and the majority of County Board members in Arlington and Supervisors in Fairfax remain strongly supportive of the streetcar project.

An independent study confirmed that the streetcar will generate $3.2 billion to $4.4 billion in new real estate value (compared to $1 – $1.4 billion generated by additional bus service), nearly $1 billion in new tax revenues and create 6,600 jobs for the region. It is simply irresponsible to request the removal of state funding for a project with such a strong impact on jobs and the economy.

Your July 10, 2014 letter to local officials indicated that “implementation of a seamless streetcar system between Columbia Pike and Crystal City will provide significantly more mobility benefits than enhanced bus service”. The Commonwealth’s recent pledge of up to $65 million in additional state transportation funds to the streetcar project reflects the importance of well planned, fiscally prudent transit solutions for our region.

Modern streetcar systems have consistently shown around the country to reduce congestion, move people, promote regional connectivity, enhance capacity, reduce environmental impact and foster economic development. Studies of the proposed streetcar system in Arlington show that we can expect all of those benefits to occur here once the system is operational.

We concur with numerous experts that have concluded that bus rapid transit does not work well without dedicated lanes – which are not possible along Columbia Pike – and that buses cannot match the capacity that a streetcar system affords. There simply cannot be enough bus traffic along the Pike to accommodate the ridership expected over the next 25 years. No buses that match the streetcar’s capacity have been approved for use in the United States because of the heavy damage such buses would inflict on roadways. Only a rail-based solution can be safely and effectively operated to meet the projected demand for rides along Columbia Pike.

We cannot allow the Garvey-Vihstadt position to affect the Commonwealth’s commitment without jeopardizing the careful plans adopted by Arlington County based on the Columbia Pike Neighborhood Plan and Crystal City Sector Plan. These reflect years of sound planning and wise transit-oriented development that promise to create jobs, move people, protect neighborhoods, develop our economy, and protect the substantial affordable housing  that exists along these corridors.

Their flawed strategy would not save any taxpayer dollars, but would instead move funding to other transit projects around the state that would not match the economic development and diversification that the streetcar would promote along the Pike, in Pentagon City, in Crystal City and in neighboring jurisdictions.

We call on you, Governor McAuliffe, and the Commonwealth Transportation Board to keep the dedicated funding for the Arlington streetcar project in place, because we know it is the best investment for the future of Arlington and the Northern Virginia region. Sincerely yours,