It’s a tough contest who’s the most extreme and/or bigoted and/or crazy Barbara Comstock endorser, given that she’s already been endorsed by the likes of: 1) right-wing hate radio host Mark “Full Mussolini” Levin; 2) Sean “Cliven Bundy’s most strident champion” Hannity; 3) Penny “Age of Enlightenment and Reason lead down a slippery slope (don’t ask) to the Holocaust” Nance of the Concerned Women for America (publishers of “Harry Potter: Seduction of the Occult”); 4) John “Jesse Helms protege” Bolton; 5) Brent “President Obama a ‘skinny, ghetto crackhead” Bozell; and 6) the anti-Semitic “joke” dude. Now, though, someone who gives these folks a run for their craaaazy money – “The Donald” Trump himself – has weighed in on her behalf. In addition to being a “birther” (questioning whether President Obama was born in the U.S., whether his birth certificate is real, etc.), Trump has said all kinds of bizarre stuff over the years. Just recently, for instance, Dr. Trump claimed that the Centers for Disease Control “should be ashamed of themselves” for opposing strict Ebola quarantines as counterproductive (which the vast majority of actual doctors say they would be). Trump’s also a climate science denier (of course!) and anti-vaccination nut. Given all this, you’d think Barbara Comstock would be running as fast as she could to disown and disavow Trump’s endorsement. Instead, she just retweeted it. That really says it all. Next Tuesday, vote for John Foust! 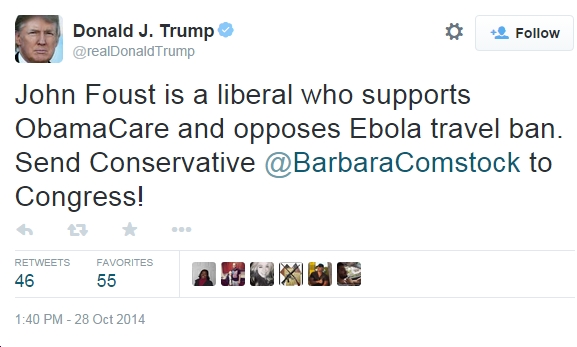