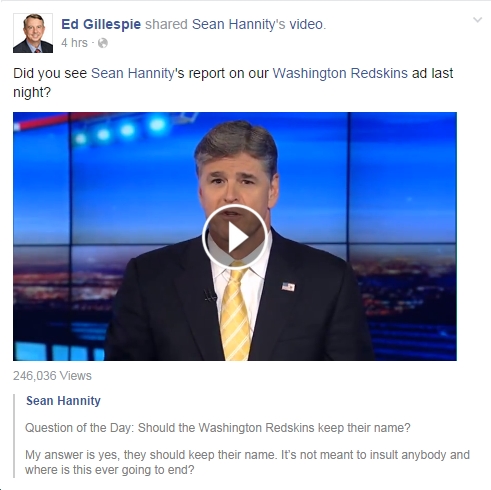 Note what’s NOT on that list of concerns? That’s right, the name of the Washington NFL franchise. My guess is that it’s probably a top priority for about, oh I dunno, 0.001% of Virginians? Yet THIS is what lobbyist “Enron Ed” Gillespie has chosen to focus his energies on during the final 6 days of this campaign? Can we say “utterly out of touch” or what? Pathetic.

Making matters worse, Gillespie seems to think that citing right-wing extremist, demagogue, and all-around buffoon Sean Hannity is something positive, in support of his staunch defense of the Washington NFL franchise’s name, which many (albeit not a majority) believe is racist and/or derogatory and/or simply idiotic (I’d fall into pretty much all three categories, particularly the latter two).

By the way, note that by far the top-rated comments on Gillespie’s own Facebook thread basically make the points noted above.

*”With all of the problems our country is experiencing I fail to see why a football team should be any of their concern?” (17 “likes”)

And those are Gillespie’s supporters saying that! Total #FAIL, get this guy off the stage (anybody have a hook handy?).