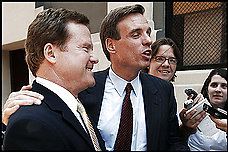 In his endorsement, Webb cited Senator Warner’s work on behalf of Virginia’s military families and veterans and his commitment to reaching across the aisle to find solutions for Virginians.

“Mark Warner has been a friend and a colleague for many years,” said former Senator Jim Webb. “I will always appreciate his efforts on behalf of my Senatorial campaign in 2006, and I believe it is in the best interests of all Virginians to return Mark to the Senate.”

“I am honored to have the endorsement of Senator Webb,” said Senator Warner. “Senator Webb was a leader in the Senate in his work to pass the new GI Bill and reform the criminal justice system.  I’m proud of what we accomplished together, securing funding to expand Craney Island, introducing legislation to recognize Virginia’s Indian Tribes and pushing for oil exploration off Virginia’s coast.”

As colleagues in the Senate, Webb and Warner were successful in securing $24.7 million in federal funding to expand Craney Island at the Port of Virginia, doubling terminal capacity and creating hundreds of jobs.  Warner and Webbalso introduced legislation to speed up the timetable for offshore oil exploration off Virginia’s coast and to ensure Virginia would receive it’s fair share of revenues.

Senator Warner has worked tirelessly in the Senate on behalf of Virginia’s military families and veterans.  Warner convinced the U.S. Dept. of Veterans Affairs to certify the College of William and Mary’s Puller Clinic as a national best practice program, using law students to help veterans expedite their disability claims on a pro bono basis.  The clinic has now expanded from one to 15 and has been approved by the American Bar Association. Sen. Warner also has fought to block Pentagon plans to cut its network of commissaries, which young military families rely upon to help balance their family budgets.