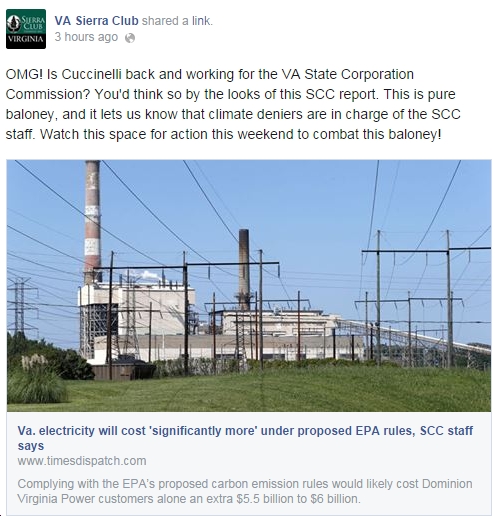 This morning, one of the most powerful entities in Virginia (that almost nobody has ever heard of) said something so stupid, so seemingly crazy, so contrary to verifiable facts, that at first it almost seemed like an “Onion” parody. But no, apparently it was real, if you believe the news reports. The question is, why did the SCC do it? Are they really a bunch of climate science deniers, as the Virginia Sierra Club says? Or are they “playing politics with climate change science…bringing discredit on the commission,” as Virginia Sierra Club Director Glen Besa believes?

Actually, I’d say this goes way beyond climate science denial or playing politics (although certainly both of those are possibilities, maybe even likelihoods) into another seriously problematic area: namely, that the Virginia State Corporation Commission (SCC) simply does the bidding of…yep, corporations, as its name might indicate. More to the point, the SCC does NOT serve the interest of the public, unless perhaps you believe that “corporations are people, my friend,” as Willard “Mitt” Romney infamously claimed. Meanwhile, there’s yet another huge problem with the SCC: as a Virginia Democratic elected official explained to me, the SCC is “totally unaccountable,” with “zero oversight or sunshine,” and that’s absolutely “crazy.”

Just to demonstrate what a bunch of control freaks these people are, see Battle for Transparency at State Corporation Commission Moves Online. As the article correctly points out, SCC deliberations “take place behind closed doors,” and “when commissioners meet to consider guidelines for utility companies or payday lenders, the meetings are closed,” but the SCC doesn’t want anyone to know that. Believe it or not, the SCC isn’t even subject to the Freedom of Information Act. This is, in short, the exact opposite of good, honest, open, transparent government, and we should all demand that it change.

But back to the subject at hand: the SCC’s utterly laughable “analysis,” which basically consists of a bizarre, outrageously false trashing of renewable energy and perversion of economics. The reality is that, outside of the secretive bunch of corporate tools that make up the SCC, basically every other serious analyst out there sees the exact opposite of what the SCC claims to be seeing here when it comes to energy efficiency, solar and wind power. Let’s throw out a few facts, not that they will get in the way of the SCC’s slavish shilling for its corporate masters, climate science denial, or whatever else they’re up to.

1. In fact, the price of renewable energy, particularly solar power, is plummeting. See, for instance, this recent article at Greentech Media, which reports: “After a second round of bidding from developers seeking to build hundreds of megawatts’ worth of solar plants in the state, Georgia Power reported that the average price of electricity came in at 6.5 cents per kilowatt-hour. That’s 2 cents cheaper than last year’s bids.”

3. Also see this article by Vox, which reports: “The price of solar power in the United States keeps dropping. Back in 2008, the cost of installing a rooftop solar system was about $8 per watt. Today, it’s about half that – and still falling.”

4. Meanwhile, a new study by Lazard –  one of the world’s leading financial advisory and asset management firms (not exactly a bunch of “lefties” or whatever) – demonstrate how competitive clean energy’s become (even with massive implicit and explicit subsidies to fossil fuels), and also how much cheaper renewable power is going to get over the next few years. No wonder why the International Energy Agency just explained how solar “could be the world’s largest source of electricity by 2050.”

4a. Also note that Lazard estimates that energy efficiency, onshore wind and utility-scale solar alreadly cost less than nuclear or coal, and again that’s WITHOUT taking into account the massive subsidies that go to fossil fuels, or their negative health/environmental/national security “externalities.” In addition, Lazard predicts that solar power will continue to fall in cost in coming years (as will wind power), meaning that fossil fuels will increasingly be left in the (coal) dust.

5. Another commenter at the RTD makes some great points, very well worth posting here as well.

Frankly, I am shocked that the SCC Commissioners would allow their staff to release official comments to the EPA that are so grossly inaccurate and based on outdated analyses and information about Virginia’s electricity supply. Specifically, the comments belie the reality of what is actually happening in the electricity markets-industry is shifting away from fossil fuels and toward energy efficiency and renewables. The SCC staff seems stuck in a 1950’s mentality and we are a real 21st century climate crisis. Fortunately, the markets understand this and if big utilities like Dominion and AEP think they can ignore this and keep doing what they’ve always done, they will go out of business.

I know comparisons to California will garner automatic eye rolls from some, but this is the reality: California has the 7th largest economy on Earth, the largest in the US, by far. It is an economic powerhouse. Their electric rates are 35% higher than VA, but the average monthly bill for a consumer is 71% LOWER. This, while California is leading the nation on emissions reductions, carbon reductions, renewables, etc. And look at Texas, hardly a liberal enviro mecca, it is leading the nation in wind power development for their independent grid. But our SCC says it can’t be done. Really?

We talk about retiring old coal plants. I think it’s past time for some retirements of the old thinking and staff at the State Corporation Commission.

How about we just fire them all and start all over again?

6. Finally, as to the economics, see this analysis, which finds that the the “first-ever limits on carbon pollution from power plants can save American households and business customers $37.4 billion on their electric bills in 2020 while creating more than 274,000 jobs.” For Virginia specifically, this analysis —  conducted by ICF International, “a highly respected firm that has studied electricity markets for industry and government alike” — finds that Virginia households and businesses would save over $1 BILLION per year, starting in 2020, in addition to the 5,600 direct efficiency jobs the EPA Clean Power Plan will create in Virginia. As if that’s not good enough, cutting carbon pollution also will mean cutting other forms of fossil-fuel power pollution, such as “emissions of arsenic, mercury, lead, sulfur and soot.” This will improve the health of Virginians (including saving lives), and also reduce health care costs significantly. Win. Win. Win. etc.

7. The bottom line is that energy efficiency is already the cheapest source of power (“negawatts”),  while solar and wind power are already cheaper than fossil fuel alternatives in large swaths of the U.S. — and this trend is only going to continue in coming years. The question is whether the SCC, Dominion Power and the fossil fuel industry will get a grip on this reality, or will they instead stand athwart the inexorable march of history screaming “STOP!” (as their business model rapidly goes down the tubes, and our economy and environment along with it)?

P.S. If you want to read the SCC’s trash, click here. I wouldn’t recommend it, though, unless you like reading really, really bad fiction.