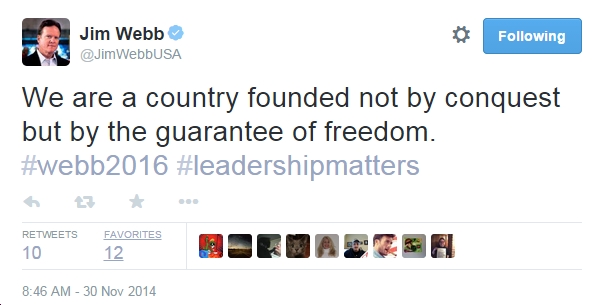 I saw this posted on Jim Webb’s Twitter and Facebook accounts this morning, and thought it was an interesting post-Thanksgiving topic for conversation. Here are a few of the comments on Webb’s Facebook page to kick things off.

Top comment: “‘conquest’…..the Algonquin + Lakota have not been in that round-table workshop, i guess.”

Second-highest-rated comment: “Jim, want to demonstrate some leadership in your pre-campaign, get into the march to Jefferson City. Otherwise, do something to demonstrate that black lives are just as important as white lives. Right now equal protection for young black males under the law is deficient.”

Third-highest-rated comment: “Our constitution is a deeply flawed document. For God’s sake it defined black people as 3/5 of a person. It was written totally to preserve the power and influence if the southern slave states – a power that continues today- the power if the minority radical south.”

More: “Eh. Maybe not founded on conquest but certainly built on conquest.” “Not by conquest? Open a history book for God’s sake!” “Sir, you will have to do better than empty, false rhetoric if you want my vote. Let’s not try to rewrite history, let us move forward ‘eyes wide open.'”

My view is that our nation has made tremendous progress since 1776, but at the time of its founding, it was far from guaranteeing freedom or not being founded/expanded, at least in part, by conquest. With regard to “guaranteeing freedom,” as one of my progressive friends put it, “Equal protection under the law wasn’t in the original bill of rights.” I’d just add a historical fact, that at the founding of the United States, most people were not guaranteed full freedoms, including: African Americans, Native Americans, female Americans, non-land-owning white Americans, etc, etc. To the contrary, African Americans were enslaved through the Civil War, after which the “Jim Crow” system of segregation kicked in for another 100 years. Women weren’t given the right to vote until 1920, nearly 140 years after the U.S. constitution was written. The point is, it took progressive change for this country to evolve into the much, much more free and fair country (but far from perfect, as the events of Ferguson yet again demonstrate) it is today.

As for Jim Webb’s assertion that our country was “founded not by conquest,” I guess I’m just amazed that anyone who’s studied history could say such a thing. Let’s try to give Webb as much benefit of the doubt as possible, and assume he was strictly focused on when the U.S. was “founded,” not what came afterwards. Even so, a 5-second Google search is all it takes to find stuff like this:

In the early years of the British colonization of North America, military action in the colonies that would later become the United States were the result of conflicts with Native Americans, such as in the Anglo-Powhatan Wars between 1610 and 1646, the Pequot War of 1637, King Philip’s War in 1675, the Susquehannock war in 1675-77,[7] and the Yamasee War in 1715. Father Rale’s War (1722-1725) happened in Maine and Nova Scotia. There also occurred slave uprisings such as the Stono Rebellion in 1739. Finally, there was Father Le Loutre’s War, which also involved Acadians, in the lead up to the French and Indian War.

The point is, when the Europeans came to America, it was not a barren land, but one filled with people already living here.  So how did that land end up moving from Native Americans to European settlers? Hint: it wasn’t through sweetness, sunshine, puppy dogs, unicorns and rainbows.

As for U.S. history after its founding in 1776, let’s think about how huge swaths of territory came to be part of our country. Let’s start with Texas, California, New Mexico, Arizona, Nevada, Utah, and parts of Wyoming and Colorado, all of which came into the U.S. through conquest during the Mexican-American War of 1846-1848. Florida? We got that mostly through wars against the Native Americans living in that area. Ohio? Try the Northwest Indian War. Guam and Puerto Rico? Try the Spanish-American War of 1898. The Pacific Northwest? Try a series of wars, such as the Yakima War, the Rogue River Wars (southern Oregon), the Puget Sound War, etc. These were most certainly wars of conquest, specifically against Native American peoples which had lived there for hundreds of years. The Dakotas? Numerous military actions, including the Dakota War of 1862.

On and on it goes, but you get the picture. Which is why it’s strange to hear Jim Webb, a man who has studied history, assert so definitively that “We are a country founded not by conquest.” Yeah, tell that to the Native Americans, Mexicans, etc.