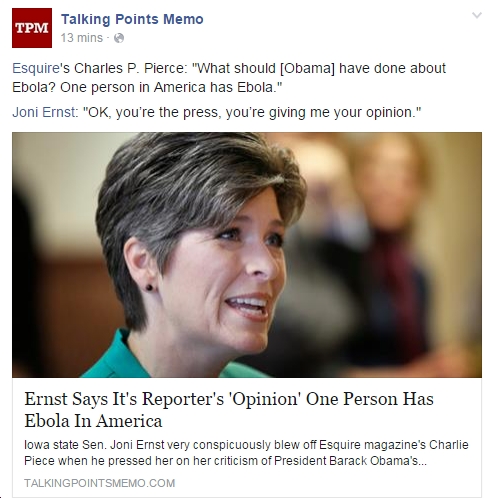 According to an article in Politico (aka, “Tiger Beat on the Potomac“) this morning did what it does best: mindlessly parroting whatever Republicans tell them to say. Thus, according to Tiger Beat…er, Politico:

*”National Republicans managed this year to snuff out every bomb-throwing insurgent who tried to wrest a Senate nod away from one of their favored candidates.”

*”The distinctly different flavor of the 2014 Republican class is partly a product of calmer national atmospherics. A few years removed from the post-2008 economic panic and the red-hot tea party anger over the passage of the Affordable Care Act, there’s been more maneuvering room in 2014 for candidates with calmer dispositions and more traditional political résumés.”

*”…in a string of important races, forces from the GOP’s business wing have also directly interceded to avert the nomination of rogue hard-liners.”

And on and on…you get the picture. The final quote, from Republican pollster Robert Blizzard, really says it all: “Invoking two of the party’s most famously disastrous recent nominees, Blizzard added: ‘There really are no [Richard] Mourdocks or [Christine] O’Donnells in this class of GOP candidates. That’s because our best general election candidates won their primaries this time around.‘”

Sounds good, right? The relatively sane, “business wing” of the Republican Party has reasserted itself over the Tea Party crazies? Yeah, except for one thing: it’s not in the least bit true. Evidence?

Exhibit A: Iowa Republican U.S. Senate nominee Joni Ernst, pictured above denying the facts about Ebola (some sort of media conspiracy, natch) is as extreme as they come.

Among other stances, Ernst has endorsed impeachment for President Obama, expressed the belief that states could nullify federal laws, and supported “personhood” anti-abortion laws that would outlaw most forms of contraception. In addition, she’s slammed Medicaid recipients for not taking “personal responsibility for their health”-even though recipients have to apply for coverage-and talked extensively about “Agenda 21,” a decades-old U.N. recommendation for environmental sustainability that forms the basis for conspiracy-mongering on the far right. “The United Nations has imposed this upon us, and as a U.S. senator, I would say, ‘No more. No more Agenda 21,’ ” she said during a January forum for GOP Senate candidates.

Not enough for you? Then how about this, in which she talks about her “beautiful little Smith & Wesson, 9 millimeter,” and how she’s more than ready to use it against the “government, should they decide that my rights are no longer important.” She’s also stated “that local sheriffs ought to arrest federal officials implementing the Affordable Care Act.” Oh, and of COURSE she’s a climate science denier, which alone should put her in the extremist/crazy camp. So why isn’t the media treating her just like they treated Tea Party extremists Todd Akin, Richard Mourdock, Christine O’Donnell, etc? Uhhhh.

Exhibit B: Colorado Republican U.S. Senate candidate Cory Gardner is a co-sponsor of the Life At Conception Act in Congress, which would ban all abortions, as well as many forms of contraception, in-vitro fertilization, embryonic stem cell research, etc. Oh, and Gardner also “co-sponsored a bill narrowing the exception to federal abortion funding to ‘forcible rape,‘” has denied climate science and is an anti-environment extremist. Again, is the media covering any of this? If not, why not?

Exhibit C: Arkansas Republican U.S. Senate nominee Tom Cotton “expressed his belief that ISIS is now working with Mexican drug cartels to infiltrate America over our southern border.” Yep, utterly bonkers. But not to Politico, parroting whatever propaganda Republicans push on them.

Exhibit D: The hundreds of other Republican House and Senate candidates who deny or question climate science, all of whom should be slapped with the “crazy” and “extreme” label and disqualified from holding ANY public office for that alone. But they aren’t.

So again, why is the Beltway media swallowing the Republicans’ story about how the “mainstream” of the party has triumphed over the Tea Party crazies? Perhaps because, as Paul Waldman wrote in the Washington Post recently: “the problem is the standard that reporters  use, probably unconsciously, to decide which gaffes are worthy of extended discussion and which ones merit only a passing mention, a standard that often lets GOP candidates get away with some appalling stuff.” Thus, minor, petty stuff like Alison Grimes not answering directly whether or not she voted for Barack Obama for president is basically so horrible as to be “disqualifying,” according to Chuck Todd. Yet the bat***-crazy stuff listed above is apparently fine and dandy. As Paul Waldman concludes in his Post article:

So ideological extremism and insane conspiracy theories from the right have been normalized. Which means that when another Republican candidate says something deranged, as long as it doesn’t offend a key swing constituency, reporters don’t think it’s disqualifying. And so it isn’t.

A disturbing state of affairs, to put it mildly.

Virginia Del. Lee Carter says Kelly Loeffler's Attila the Hun ad is "eliminationist" and writes, sarcastically, "Definitely not a reason for the rest of us to be armed and prepared for community defense." https://bluevirginia.us/2020/09/monday-news-us-to-hit-200k-dead-trump-sees-no-need-for-regret-from-trump-no-respect-for-ruth-bader-ginsburg-or-the-rules-justice-ginsburg-is-gone-but-democracy-must-survive-faceboo#comment-5079742244