(UPDATE 6:20 pm: It looks like this boondoggle, polluting monstrosity/project from hell has gone down to defeat in the U.S. Senate. Great work by everyone who cares about our planet; shame on everyone who doesn’t! – promoted by lowkell)

I’ll post video when it’s done uploading. It’s great to see real leadership on this issue from Sen. Kaine. As for Virginia’s other Senator…not so much, it would appear.

Mr. President, I rise in opposition to the bill mandating approval of the Keystone Pipeline. I oppose the project because accelerating the development of tar sands oil is contrary to our national interests, our economic interests, national security interests and environmental interests.

I believe there is no way to fully analyze this question without grappling with another question-is carbon pollution from human activity affecting the world’s climate in a negative way? Because, if carbon pollution doesn’t affect the climate, then tar sands would not be a significant issue for me. But, if we accept the general scientific consensus-and Virginians do-that carbon pollution does cause negative changes in climate, stopping or even slowing the development of tar sands oil is good for the United States and good for the world.

Some who have encouraged me to support this project, duck when I ask this question: Do you think manmade carbon pollution affects our climate? One Virginia CEO, whose company is filled with scientists, basically told me, “I don’t know, I’m not a scientist,” and a representative of the United States Chamber of Commerce testified similarly before the Senate Foreign Relations Committee earlier this year. But those of us who take an oath to serve here have a responsibility to consider the scientific evidence. 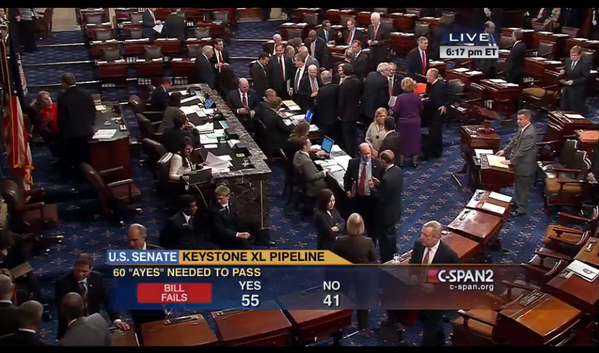 In Virginia, the second largest region is Hampton Roads comprised of 1.6 million people living in numerous cities and counties along the Chesapeake Bay and the Atlantic Coast. Hampton Roads is a thriving economy and it’s also the home of the largest concentration of naval power in the world. It is also, next to New Orleans, the region most directly affected by rising sea levels, and all agree that rising sea levels are caused, in part, by carbon pollution. Climate changes are not a tomorrow issue in Virginia. They are a today issue. Throughout Hampton Roads, rising sea levels are causing significant challenges-flooding roads, homes and neighborhoods damaged, some even unmarketable, economic harm to families and businesses. At current projections, the main access road into the U.S. Navy’s principal base in Hampton Roads will be flooded and impassable three hours a day by 2040. With an economy so dependent upon the naval presence, anything that threatens this military investment is potentially devastating. I sponsored a symposium on sea level rise in Hampton Roads this summer, attended by hundreds with bipartisan representation from local, state, and federal officials and members of Congress. The concern is real, and virtually all estimates of sea level rise in this community pose staggering challenges to every aspect of life here for years to come.

So what’s the answer to this problem, and how does it relate to the Keystone Pipeline?

We have to continue to move toward a cleaner energy economy. We can’t throw the brake on the use of fossil fuels; that would be unrealistic and would hurt our economy. As governor of Virginia, I supported building a state-of-the-art coal plant in exchange for converting a plant that predated the Clean Air Act to natural gas. I support development of offshore energy.

We always have to make sure that regulations strike the right balance, but by becoming cleaner tomorrow than today, we’re creating jobs, protecting the environment, reducing our trade deficit and ending our overdependence on energy from foreign nations. And, as members of the armed services committee-the members here on the floor-the reduced energy independence is great for American national security.

And, Mr. President, this is why I oppose the Keystone project. Tar sands oil is dirty energy producing significantly more carbon pollution than conventional petroleum. After all we have done to be cleaner tomorrow than today, why would we embrace the technology that is a huge backslide, that produces more, not less, carbon pollution than conventional sources? Embracing a dirtier energy technology moves us precisely in the wrong direction.

Now, Keystone is a simple project; it is neither the environmental game-over that some would suggest, nor the energy panacea that others promise. But whether or not we embrace tar sands oil development does send a message about how we intend to meet American global energy needs. We can either send the message of “cleaner tomorrow than today” or send a message “anything goes.” Because U.S. innovation is helping us lead the world to “cleaner tomorrow than today” energy future, we shouldn’t turn back now. There are those who say that the tar sands fields of Alberta will be developed anyway, so why doesn’t the U.S. Just go along? The owners of the resource may well develop it and find alternate routes to ship it through Canada. They can make that decision on their own, although falling oil prices may make the relative costs of such investment non-competitive. But even if the owners of those fields decide to move forward in this development, the official policy of the United States should not, in my view, be embrace, promote and accelerate tar sands oil. Our official policy should be “cleaner tomorrow than today,” not “anything goes.”

For these reasons, Mr. President, I oppose the bill to force approval of the Keystone Pipeline project and make accelerated tar sands oil development the official policy of the United States, and I yield the floor.