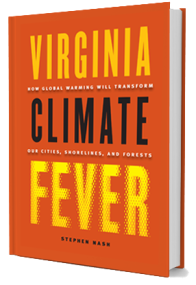 The mid-Atlantic enjoyed one of the most delightful summers in memory this year, causing a lot of snickering to the effect that if climate change means moderate temperatures and low humidity, then bring it on, baby! Elsewhere on the planet, though, “bringing it on” translated into a whole lot of hot. For a good laugh at our own parochial mindset, check out the map of relative temperatures that accompanies this article about NOAA declaring 2014 on track to be the hottest year on record.

This sad reality check shows that global warming has not paused or gone away, and Virginians had better try to understand what’s coming so we can start preparing. It turns out our problems go well beyond sea level rise, as we learn this week from guest blogger Seth Heald.

Oh, and don’t miss the note at the bottom about the November 6 event.

Virginia climate activists (and indeed all Virginians) should cheer Stephen Nash, whose Virginia Climate Fever (just published by The University of Virginia Press) lays out clearly the costs of our decades of inaction on global warming. The book’s subtitle nicely sums up the point: How Global Warming Will Transform Our Cities, Shorelines, and Forests.

Why a climate book focused on just one state?

One of many confounding challenges of global warming is how to get people (and politicians and businesses) to take action commensurate with the size of the problem. As the popular British social scientist Roman Krznaric asks, “how can we close the gap between knowledge and action on climate change?” Krznarik’s answer is to seek ways to increase our empathy for people who live in distant places, or will live in future times. Certainly that is needed. (The U.S. edition of Krznarik’s book on empathy comes out in November.)

But since the day of increased empathy has yet to arrive, climate communications experts have focused on the need to get people to realize that climate change is happening here and now. It’s not just about our grandchildren, or even our children. It’s about us too. Now. And it’s not just about poor people living at sea level in Bangladesh, or the soon-to-disappear Maldives, or where melting glaciers threaten tens of millions of people’s water supply. Global warming is happening to us in America, and right here in Virginia. What’s more, it’s not limited to low-lying, frequently flooded parts of coastal Virginia, like Norfolk. Climate disruption is happening all across the commonwealth-from the shore to the tidal Potomac near Alexandria and Washington to the Piedmont to the mountains.

Climate communications experts agree that people are more likely to act (and demand that their leaders act) on global warming if they understand that it will have serious effects in their lives, and where they live.

Virginia Climate Fever does a superb job of bringing climate change home to Virginia. Nash, a journalist who writes with a deft touch, has taught at The University of Richmond since 1980, and he clearly knows Virginia well. He is is well versed in the science of climate disruption, and very good at explaining it. The book is filled with information gathered from interviews with scientists, including several at Virginia universities.

One leading climatologist featured prominently is Katharine Hayhoe, head of the Climate Science Center at Texas Tech University. As the book explains, she also happens to be an evangelical Christian whose faith informs and inspires her work. At Nash’s request, Hayhoe and a colleague prepared color maps of Virginia for Virginia Climate Fever, showing stunningly how much hotter our summers and winters are likely to be in the coming decades under different levels of future carbon emissions. It’s hard for me (at age 61) to look at these and contemplate my own hotter future here, much less my children’s.

Most disturbing to my mind was Nash’s description of the future of what those maps mean for our forests. We often hear about sea-level rise and how it will combine with more-severe storms to harm Virginia, especially in the Hampton Roads area. And well we should-the situation in Virginia’s coastal areas is dire indeed. But Nash reveals that our inland and mountain forests are just as threatened. And so not surprisingly are many plant and animal species that live in or near them. Many species face the prospect of extinction this century. Nash quotes the bioclimatologist Ron Neilson as saying that large areas of Virginia forest could “go into drought stress and potentially burn up,” resulting in “some very rapid conversions from forest to savannah.” Nash asked Neilson if this could happen in the next twenty or thirty years. Neilson’s answer: “How about now?”

Virginia Climate Fever is not strictly speaking a book about energy or energy policy. Rather it’s about climate impacts from our past, present, and future energy choices. But for those on the more well-informed side of the current “I’m not a scientist, what do I know?” climate-science-denial catchphrase, Virginia’s current and future energy choices will come to mind on every page of the book.

Nash does include a chapter on possible prescriptions for our climate fever. He tellingly notes: “we don’t lack for examples among other states,” citing North Carolina and Maryland as two of many states considerably farther along in addressing changing climate. He cites with approval Maryland’s efficiency and conservation measures, and its mandatory renewable portfolio standard, noting that Virginia is one of only nineteen states with no mandatory renewable standard at all. He mentions Maryland’s participation in the multistate Regional Greenhouse Gas Initiative. Again, “Virginia is not on the list.”

Nash asked Virginia’s Department of Environmental Quality about climate change and got this written response: “The Virginia [DEQ] does not have the expertise to study climate change issues.” One could not find a better sentence to sum up the four lost years of the McDonell-Cuccinelli administration’s climate denialism.

Governor Terry McAuliffe and Senator Mark Warner enthuse about a mindless “all of the above” energy policy that includes fracking (and associated pipelines), offshore oil drilling, coal exports, and ever more reliance on fossil fuels. (To his credit, Senator Tim Kaine has said that “all of the above” is not a strategy-yet nevertheless supports offshore oil drilling.) Virginia Climate Fever is a wake-up call for them, and for the “I’m not a scientist” crowd, and for all Virginians.

But of course there have been other such calls in the past few decades. The question is, when will enough Virginians hear them clearly, and begin to act with a sense of urgency?

Seth Heald is vice chair of the Sierra Club Virginia Chapter. He is a student in the Master of Science in Energy Policy and Climate program at Johns Hopkins University.

Note: Northern Virginians will have an opportunity on November 6 to meet Stephen Nash in Alexandria at an author talk and book signing. Details and RSVP form are here.

.@Jaaavis - Virginia’s 7th District GOP Committee Votes to Change Convention Call From 4/25 to “To Be Determined”; Also Votes to Proceed with Lawsuit Re: Gov. Northam’s Ban on Gatherings of 10+ People https://bluevirginia.us/2020/04/virginias-7th-district-gop-committee-votes-to-change-convention-call-from-4-25-to-to-be-determined-also-votes-to-proceed-with-lawsuit-re-gov-northams-ban-on-gatherings-of-10-people via @bluevirginia