Crazy and stupid as usual from EW Jackson. “Stupid” in several senses: 1) we absolutely DID do horrendous things, if you read that tortured (“enhanced interrogation”) report; 2) I’d think John McCain, who was actually tortured, would know better than EW Jackson; and 3) McCain wasn’t held by the Viet Cong (“a political organization and army in South Vietnam and Cambodia that fought the United States and South Vietnamese governments during the Vietnam War”), he was tortured in a North Vietnamese prison. Also moronic is the concept that just because Democrats wrote this report, the facts must be wrong in some way. In fact, this report was highly watered down, redacted, etc. from the vast amount of material collected, which means that the full truth is almost certainly far worse even than this horrendous summary. Of course, fanboys of torturing people like EW Jackson don’t care, but still. Finally, what about shoving stuff up people’s butts, freezing them to death, and all the other horrible s*** revealed in this torture report, makes this “political propaganda” not torture? Or am I spending wayyyy too much time trying to parse the rantings of an extremist lunatic like EW Jackson? 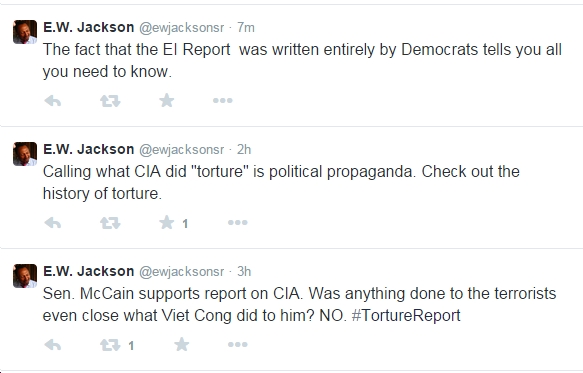 Photos: Virginia Voters Start the Process of Turning Our Country Around From the Trump Disaster

Photos from Loudoun, Virginia Beach of Virginians voting on Day #1 of the end of the Trump disaster! https://bluevirginia.us/2020/09/photos-virginia-voters-start-the-process-of-turning-our-country-around-from-the-trump-disaster

Here are some photos of @GovernorVA voting this morning. Great idea! :) https://bluevirginia.us/2020/09/photos-virginia-voters-start-the-process-of-turning-our-country-around-from-the-trump-disaster via @bluevirginia