Note that on November 6, the Loudoun Times reported  that Craig Parisot, who’s running against Democrat Kathleen Murphy to succeed Congresswoman-elect Barbara Comstock (R) in the Virginia House of Delegates had “said he’s making his first run with the forthcoming special.” To the contrary, it turns out that Parisot ran for mayor in Maryland town. Also note that Parisot received just four (4) votes in that election. Seriously, that is NOT a typo! The DPVA pounced on this story, as well they should have, asking: “Wonder why Craig conveniently failed to mention that he’s run before — maybe because it was in Maryland? What else will we find he hasn’t been truthful about?”  Good questions; any answers? 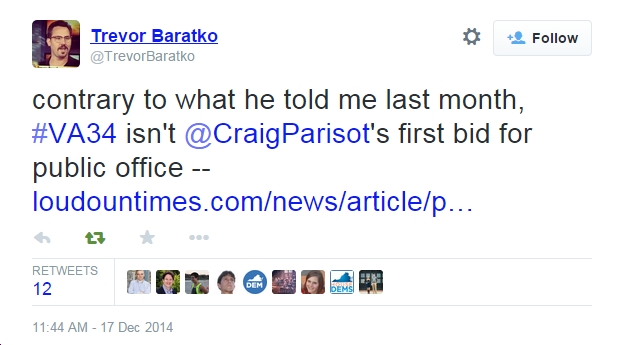 Why On Earth Are Lines to Vote So Long in Fairfax County, But Not in Neighboring Jurisdictions???

A few reactions to Virginia Gov. Ralph Northam being diagnosed with #COVID19 https://bluevirginia.us/2020/09/breaking-va-governor-and-first-lady-northam-test-positive-for-covid-19#comment-5085120064