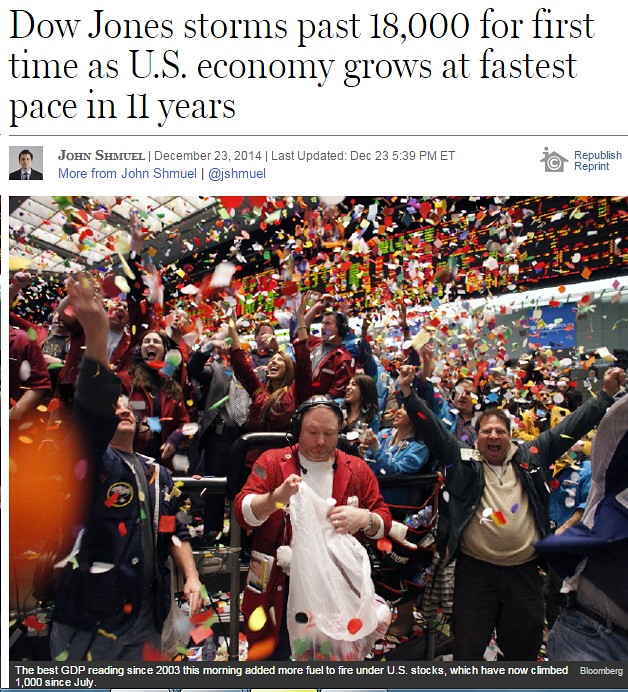 Well, well, check this out: six years into the presidency of Barack Obama, it turns out the U.S. economy is booming, the stock market is in record territory, wages are rising…etc. Or, as a headline today in the Washington Post put it: The boom is here: the economy just grew 5 percent, and it’s not going to stop. Oh yeah, and let’s not forget that we’re in the midst of an energy boom, with falling gasoline prices, plummeting crude oil imports and booming wind and solar output. All this, by the way, just six years since the economy collapsed under President George W. Bush, and not even six years since President Obama inherited one of the worst economic situations since FDR took over from Herbert Hoover in 1932.

For any observer not blinded by partisanship, right-wing ideology and/or animosity towards our nation’s first African-American president, this is beyond impressive. It’s also striking to consider the contrast between what Republicans predicted would happen and what actually happened. A few examples of the many ways in which Republicans have been (wildly) wrong the past 6 years include:

*Republicans and Tea Partiers asserted, over and over and over again, that the Recovery Act of 2009 would not work. They were completely wrong. In fact, as it turns out, the Recovery Act ended up doing almost exactly what it was intended to do: provide classic Keynesian, counter-cyclical “stimulus” to an economy in desperate need of it. The only problem, frankly, was that it wasn’t big enough, particularly in terms of aid to the states, and for that we have Republicans and a few conservadems to blame. If it weren’t for them, we almost certainly would have come out of the recession earlier and stronger than we did. In short, the current economic recovery has come about in SPITE of Republicans (and a few conservadems).

*Republicans and Tea Partiers called President Obama every name in the book, with “socialist” and even “communist” or “Marxist” being several of their favorites. Yet, just as in the case of Bill Clinton, the economy has boomed under this supposed “socialist,” with the stock market – not exactly a bastion of “to each according to his need” types – now at record-high levels. Does this sound anything like “socialism” to you? If so, then please, let’s have more “socialism,” please! 😉 Certainly, we’ve done better under this “socialism” then we did under the “capitalism” (actually, corrupt “crony capitalism”) of the Bush/Cheney years.

*Repblicans and Tea Partiers claimed that the Affordable Care Act, aka “Obamacare,” would be a disaster, the ruination of America, blah blah blah. In fact, it’s been nothing of the sort. Instead, we’re getting constant headlines like US uninsured rate heads toward new low and O-Care premiums stable nationwide and U.S. Experiences Unprecedented Slowdown In Health Care Spending. So much for Republicans predictions of doom on all those fronts. As for “Obamacare” being a “job killer,” which we heard about a gazillion times from right wingnuts the past few years, let me simply refer you to the headlines and first couple paragraphs of this post, about the booming economy, soaring stock market, plummeting unemployment rate, etc.

*Republicans and Tea Partiers were also wildly wrong about the U.S. energy situation, from absurd claims that President Obama was causing higher gasoline prices to claims that he was stifling U.S. energy production. Instead, what we’re seeing is an energy boom in the U.S. on all fronts, combined with low energy costs (including plunging costs for clean energy sources like solar and wind).

*Republicans and Tea Partiers ranted and raved about the deficit, ignoring a few important facts, like: a) President Obama inherited a deficit of $1.2 trillion from Bush/Cheney; and b) the deficit for 2014 was just $483 billion — far less than half what President Obama inherited from Bush/Cheney. Of course, if Republicans really cared about the deficit, which they obviously don’t based on their records when they were in the White House (see Reagan’s and Bush’s huge deficits, compare and contrast to Clinton’s surpluses and Obama’s sharp cuts in the deficit he inherited), they would have voted to repeal most of the Bush tax cuts. They also would have signed off on John Boehner’s “grand bargain” on the deficit with President Obama, instead of killing it. Anyway, yet again in spite of Republican wackiness (e.g., the threats to default on the debt, the government shutdown, brain-dead “sequestration”), we’ve managed to make progress on this front as well. Just imagine how much more we could have made with a Republican party willing to work together for the good of the country, as opposed to working for President Obama to “fail?” It boggles the mind.

This list really could go on all day, getting into foreign policy as well (e.g., so much for right-wing claims that Vladimir Putin was kicing Obama’s butt or whatever), but I think the point is clear by now. Bottom line: Republicans have been wrong on basically everything the past 6 years. Will they admit that they were wrong? Apologize for their overheated rhetoric and counterproductive actions during Barack Obama’s presidency? Of course they won’t! Still, it would be nice if the corporate media, not to mention voters, would stop listening to these people, stop treating them as if they had anything serious to say about the challenges confronting our country, and start assigning credit where credit is due – to the Democrats who pulled our country out of the ditch the Republicans had driven it into. Yeah, I know, don’t hold your breath…

President Biden on Third Quarter GDP Report: “today we got further evidence that our economic recovery is continuing to power forward”