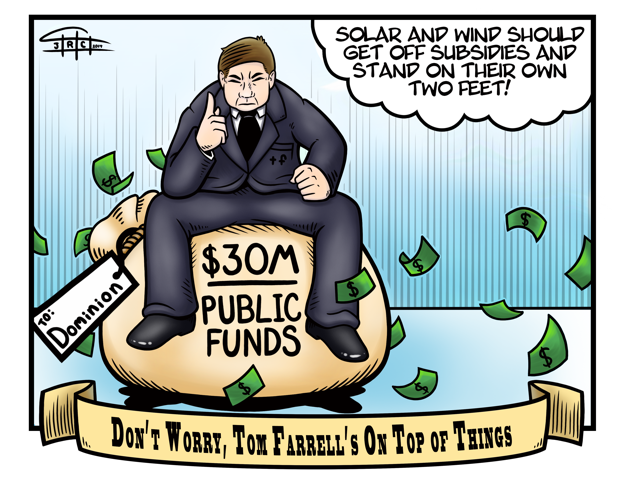 Here are a few national and Virginia news headlines, political and otherwise, for Friday, December 26. Also, check out the new political cartoon of Dominion CEO and Top Virginia Hypocrite Tom Farrell, a master at gaming/milking the “crony capitalist” system for every taxpayer dollar he can get. Can we say “legalized corruption on a huge scale?”

*The Islamic State is failing at being a state (Shocker, huh?)

*Tsunami-hit nations mark anniversary (“Memorial services are being held in Indonesia and other nations for the victims of the Indian Ocean tsunami on the 10th anniversary of the disaster.”)

*Krugman: Tidings of Comfort (“You’ll never hear this on Fox News, but 2014 was a year in which the federal government, in particular, showed that it can do some important things very well if it wants to.”)

*Jeb Bush eases out of some businesses, such as firm helped by Obamacare (Getting ready for the crazy debates, primaries, etc.)

*Murphy, Parisot face evenly divided electorate in Virginia House race (Key line: “Parisot, 41, declined to be interviewed by The Washington Post.” Also note that Parisot refused to respond to the Loudoun County Chamber of Commerce’s questionnaire. What, he doesn’t want the voters to know how right wing he is?)

*Virginians flock to see ‘The Interview’ on Christmas Day

*Today’s Top Opinion: Virginia Democrats are election hypocrites (I mean, this is the “Republican Times-Disgrace” editorial board, but still…it was predictable — and predicted, by yours truly among others — that Republicans would use this line of attack following the 74th district Democratic nomination process being so strictly limited.)

*Hampton Roads municipalities plan for what’s next with SPSA (“The year 2018 might seem far away. But in the world of regional trash disposal, it’s coming up mighty fast. That’s when the contract that governs where our trash goes expires.”)

*Weather sure to make you smile: Sunny, dry and highs in the 50s