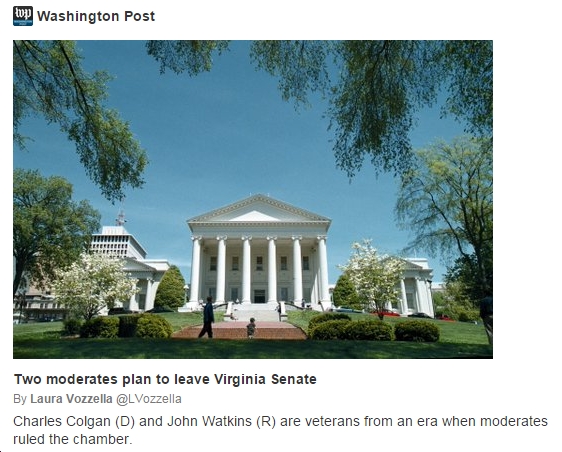 The Washington Post these days is busy blasting away at Rolling Stone for its screwups in the UVA “gang rape” story. Which is fine, except for one problem: the Post has its own accuracy problems in its own glass house, ones it might want to address before it starts casting stones at others. Exhibit A is this story by Laura Vozzella on the Virginia State Senate. A few glaring problems that jumped right out at me include.

1. “Colgan has held on in his increasingly red Prince William County district.”

Uhhhh…nice try? Or not. In fact, according to VPAP, District 29 went from a 60% Cuccinelli district in 2009 to a 57% McAuliffe/60% Northam/59% Herring district in 2013. So yeah, not only has Colgan’s district not become “increasingly red,” it’s gone in the exact opposite direction, one that President Obama won 63%-35% in 2012. Does the Washington Post have any editors? fact checkers? quality control? anything? Note that  Josh Israel of ThinkProgress pointed out this error to Laura Vozzella at 9:11 this morning, and nearly 4 hours later, has received no response, let alone a correction. I’d say “amazing,” except I’ve seen this kind of thing so many times at the Post, it’s not in the least bit surprising by now…sigh. Even worse, what I think Vozzella was doing here was something that drives me nuts about the media: deciding on a narrative BEFORE writing the story, than forcing the “facts” to fit that narrative. In this case, the narrative was that “moderates” are endangered in the Virginia State Senate. More on that in the next item.

2. “Two of the Virginia Senate’s most senior members, who are among the chamber’s last remaining centrists, are calling it quits… Colgan and Watkins hail from a time when moderates ruled Richmond’s upper chamber. Now they are a rare breed.”

How do I put this delicately? Yeah, this is utter bull****. Oh, sorry, that wasn’t delicate – my bad! LOL But seriously, is this supposed to be “journalism” or just “making s*** up?” Because, of course, this is the classic “both sides”/”false equivalency” style of “reporting,” taken to its nadir. In reality, it’s the Republican Party that’s seen the rise of a far-right-wing, populist movement (the Tea Party) in recent years, forcing its members to scramble to cover their right political “flanks.” In the Democratic Party, there is absolutely no such thing. In fact, I was talking to a senior Virginia Dem this morning and asked him when the last time an incumbent Virginia Senate Democrat had been primaried, let alone from their “left.” He couldn’t remember a single case. Nor could I (UPDATE: OK, one example I somehow forgot — seven years ago, back in 2007, Donald McEachin primaried State Senator “Benedict” Lambert after Lambert endorsed freakin’ George Allen for US Senate over Jim Webb). Which is probably why Virginia Senate Democrats are about as “centrist” as you can get;  on issue after issue, they are in the majority of U.S. and Virginia public opinion. In stark contrast, Virginia Senate Republicans like Mark “Criminalize Miscarriages” Obenshain, raving homophobe Dick Black, and many others are on the hard, hard right. A (very) short list of Virginia Senate “centrist” Democrats includes: John Miller, John Edwards, Creigh Deeds, Lynwood Lewis, Kenny Alexander, Dick Saslaw, Dave Marsden, George Barker, Chap Petersen, etc, etc. Yet according to Laura Vozella, the retirement of Chuck Colgan at  age 88 somehow puts “centrists” among Virginia State Senate Democrats in jeopardy of disappearing? Alrighty…

3. “The increasingly partisan nature of the Senate is part of why Watkins announced last month that he will not run again.”

Yes, this fits the preordained narrative the reporter decided to run with, but is there any truth to it? Not according to this article (“State Senator John Watkins announces retirement; cites post-McDonnell ethics scrutiny”). Instead, the reasons Watkins cites to CBS 6 political reporter Joe St. George are: a) “I have six grandchildren I don’t see enough of;” and more importantly b)

He said he had been thinking about retirement ever since former Virginia Governor Bob McDonnell was convicted on corruption charges in September. A situation that ushered in a new wave of ethics laws and scrutiny.

Watkins owns a nursery in the Powhatan area and serves as Chairman of the Board of Essex Bank.

“I’ve been thinking of it since this whole thing with Bob McDonnell. It will make it very difficult for someone like myself,” Watkins said alluding to the intense scrutiny that may naturally come because the generally assembly works part time. “I would always be called into question.”

Notice how that story doesn’t in any way/shape/form fit the Post article’s thesis, which is that Watkins is leaving in large part due to the “increasingly partisan nature of the Senate?” Finally, note that the CBS 6 story mentions “some speculated Watkins would rather retire than face a primary challenger.” Yep, a possible Tea Party challenge (from Watkins’ political RIGHT), which is what I was saying above — this is what’s been happening in the Republican Party NOT the Democratic Party. Details, details, I know. Other than that, great article by the Washington Post! LOL